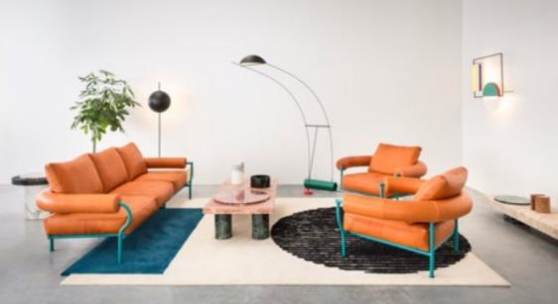 November 2016/ Design Miami/ returns to Miami Beach across from Art Basel for its twelfth edition as the meeting point of the design world's elite with a distinctly new set of projects, partnerships and programming.

This edition reveals several pronounced highlights among the fair’s gallery program – Mexican emerging and established talent will appear, with new works by Abel Zavala at ammann//gallery, Tanya Aguiñiga at Volume Gallery, and Gloria Cortina at Cristina Grajales Gallery. Unexpected materials will also be found throughout the fair, signaling a distinct inclination to the found and to the salvaged this year; ranging from new work by Misha Kahn at Friedman Benda; Hugo França’s works in reclaimed indigenous woods at Mercado Moderno; and Niek Pulles at Chamber Gallery presents everything from classical door frames to objects and products all found on the streets of his native Amsterdam. Visitors can also expect to see monumental solo exhibitions ranging from seminal designer Maria Pergay at Jousse Entreprise to renowned artist Giorgio Vigna at Elisabetta Cipriani.

Design Visionary/
New York based SHoP Architects is this year’s recipient of the Panerai Design Miami/ Visionary Award, and has produced Design Miami’s largest commission to date. It will also be the first time that an award recipient’s work will be permanently installed in the Miami Design District following the fair. SHoP’s design, Flotsam & Jetsam, uses monumental 3D printed structural elements to create an environment that evokes the past romance and innovative future of Miami.

Dean & DeLuca, the legendary New York gourmet market and leading international purveyor of fine food, is partnering with one of the world’s most innovative architects, Ole Scheeren, to create a prototype of his design for a unique food retail concept titled Stage. Stage presents a glowing, pristine object in polished stainless steel with the undulating topography of a bespoke, high tech display system, created for the powerful celebration of the preparation and presentation of food.

FENDI returns to Design Miami/ presenting a refined design collaboration, and Maison Perriet-Jouët marks its fifth year as a partner of Design Miami/ with a commission by American artist Andrew Kudless inspired by nature and the Maison’s Art Nouveau heritage. Louis Vuitton makes its debut at the fair with two new pieces for its Objets Nomades collection.

Airbnb will collaborate with Pedro&Juana, an emerging Mexico City-based design studio founded by Ana Paula Ruiz Galindo and Mecky Reuss. At Design Miami/ 2016, Airbnb and Pedro&Juana will present Sobremesa, a lively exploration of shared space. “Sobremesa” is the Mexican tradition of sharing time and space lingering around the table after a meal in casual conversation.

As part of the Design Satellites, this year’s Collectors Lounge will be designed by award-winning Istanbul-based Tabanlıoğlu Architects. Established in 1990, Tabanlıoğlu is known for cultural projects such as the Istanbul Modern and Beyazit State Library.

Iconic illustrations from the archives of the late American illustrator, John Alcorn, serve as inspiration for this year’s fair identity as well as a limited edition mini-capsule collection in collaboration with Maison Kitsuné. The collection will be available at Design Miami/ and The Webster as well as online at Maison Kitsuné and at Kitsuné stores in Hong Kong, Paris, Tokyo and New York City.

CNN Style joins Design Miami/ as the official news outlet for the 2016 edition of the fair. The platform will have an on-site newsroom and broadcast live daily. National real estate brokerage Douglas Elliman will present this year’s Design Talks program in a new theater space designed by architects from real estate development firm, DDG, supported by the Herberger Institute for Design and the Arts at Arizona State University.