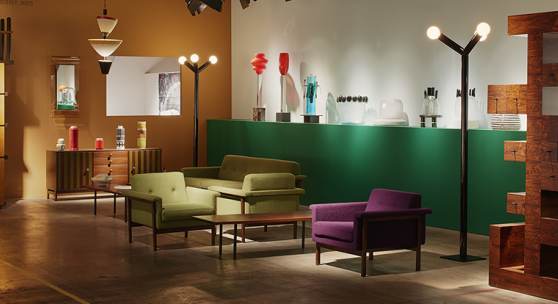 Design Miami/ Basel 2018 Satellites & Collaborations
CALVIN KLEIN presents/ An Expansive International Landscape
CALVIN KLEIN’s first installation at Design Miami/ Basel presents a unique vision of an expansive international landscape, as interpreted by Chief Creative Officer, Raf Simons, featuring an authentic American barn and a showcase of limited edition Cassina Feltri armchairs with upholstery selected by Mr. Simons. An admirer of Gaetano Pesce’s work, Mr. Simons approached Cassina about initiating what he refers to as a “cultural correspondence.” The result is a selection of 100 numbered Feltri armchairs in which CALVIN KLEIN house codes are applied to the armchair’s interior upholstery.

The Leonardo DiCaprio Foundation presents/ ENDANGERED by Porky Hefer
The Leonardo DiCaprio Foundation, in collaboration with SFA Advisory and Southern Guild, presents a project of collectible design pieces by renowned South African designer Porky Hefer. Drawing attention to the foundation’s dedication to the long-term health and well-being of all Earth’s inhabitants by supporting projects that build climate resiliency, protect vulnerable wildlife from extinction, and restore balance to threatened ecosystems and communities, Hefer created five large-scale, functional, and sculptural designs of endangered species: orangutan, polar bear, sloth, blue whale, and great white shark. Visitors are invited to sit in, on, and around these friendly sculptural creatures, igniting a sense of empathy as the stories of the animals’ hardships and the importance of their survival to our own lives are recounted through interaction, video, and text.

Limited edition Feltri by Gaetano Pesce for Cassina with vintage quilts selected by Raf Simons for CALVIN KLEIN/ Porky Hefer and Endangered Orangutan/ Porky Hefer, 2018/ Courtesy of Southern Guild & SFA Advisory. Photo by Antonia Steyn
Stuart Parr Collection presents/ The Mini, The Mighty, and The Moto
Stuart Parr presents selections from his collection of classic 1950s, ‘60s, and ‘70s Italian motorcycles and cars in the following three categories. The Mini: These small but versatile vehicles have a top speed of about 60 mph from the rear-mounted, mostly two-cylinder engines. They were and still are the ultimate beach car and, for Fiat founder Gianni Agnelli, a perfect fit for his yacht. The Mighty: The magnificent Iso Grifo designed at Bertone by Giorgetto Giugiaro is equipped with powerful Chevrolet Corvette engines, ensuring reliability and autostrada speeds upwards of 140 mph, making it one of the world’s fastest production cars at the time––Italian beauty, American muscle. The Moto: Italian motorcycles were born on the track. Their story has been inscribed on the most famous racing tracks in the world.

ETEL Presents a (Con)temporary Home
The Collectors Lounge, presented by ETEL and designed by Superluna, is a space where collectors and members can enjoy a drink from the Perrier-Jouët bar, and relax in an atmosphere designed to mirror a domestic environment filled with pieces rich in Brazil’s contemporary themes and history. Curated with selected pieces from ETEL’s collection of contemporary design and re-editions of iconic modern Brazilian design, the entire Lounge structure is covered with textile panels, creating a frame for an intimate space.