Winter and Summer Editions for 2020 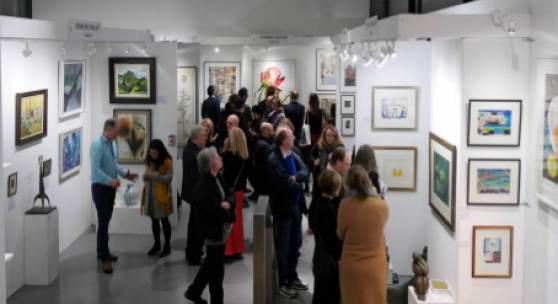 The inaugural Connect – The Independent Art Fair opened at the Mall Galleries on Tuesday, 29th January 2019. The dealer-organised event was very well received by art collectors and dealers alike. The committee has now announced that the Fair was such a success that The Mall Galleries have been booked for another Winter Fair in 2020 and summer dates have also been added. The Winter Fair will take place from Thursday, 30th January until Sunday, 2nd February 2020 with the preview opening on Wednesday, 29th January. The organisers managed to push the Fair back by a day to allow for it to be open all weekend. The Summer Fair dates are from Thursday, 25th until Sunday, 28th June 2020 with the opening on Wednesday, 24th June.

The idea for the Fair came up when dealers James Manning and Anna Wakerley (Oriel Fine Art) chatted at another fair and felt that there was room for a fair that provides a sensible price opportunity for collectors, galleries and dealers by working as a dealer co-operative. Given recent gaps in the fair calendar they saw an opportunity to give dealers of all means, interests and addresses a chance to show in Central London.

They quickly found support among other dealers and once The Mall Galleries were identified as the perfect location for the inaugural fair, a committee of dealers was quickly formed and the Fair was fully booked in record time.

Freya Mitton, Matthew Hall (Panter & Hall) and Guy Saunders (Saunders Fine Art) formed the committee together with Anna and James, supported by all the dealers who signed up, creating more of a co-operative feeling to the Fair, which was no doubt part of its success. Visitors and participants were impressed by its friendliness and variety of high quality works at a wide range of price points. There was certainly a sense of an art lovers Fair resulting in a busy Fair with sales across the board.

Anna Wakerley says: “The success of throwing together a new fair absolutely correlated with the enthusiasm of everyone involved. We were thrilled with such a positive reception. I can't deny that it was hard work organising a Fair from scratch, but we had a great team and the Mall Galleries were extremely supportive as were all the participating dealers. Its success speaks for itself and we have been encouraged by both the visitor and dealer feedback that London definitely has appetite for a new art fair.”

Most of the dealers who participated in the inaugural Fair wanted to rebook immediately with feedback declaring Connect 'the friendliest fair to join in London', and many asked for a summer fair too. Invitations to join the 2020 Fairs will go out shortly, but Connect also wants to give new dealers an opportunity to join rather than sit for years on a waiting list. 2020 will see some stands especially tailored to the 'Up and Coming' new young dealers to give the next generation a helping hand!

James Manning adds: “We have been encouraged to look at organising two fairs a year and June seems the obvious choice. It has already established itself as the month when London turns into the art capital. Art lovers come from all over the world to see some of the best art, and we feel that there is room to engage with all collectors, including younger collectors who appreciate art. They may not be in the market to spend five or six figure sums on art yet, but are attracted to learning about art and start at a more modest level.”

The inaugural Fair provided a wide platform with no overall designation of genre or era other than the criteria being good vetted quality at sensible prices. The 32 dealers were showing a wide array of all styles, from the traditional qualities of the 16th century to the current contemporary, with a good backbone of the much loved 20th century schools - from St Ives to British Abstract with a sprinkling of Scandinavian mid-century modern. With dealers from as far as Dorset to local dealer Panter & Hall, there was an excellent mix of dealers providing something for everyone's taste. This was also helped by the price range which averaged from £500 to £20,000, but with plenty of works from as little as £50 and with the top price tag at £100,000.