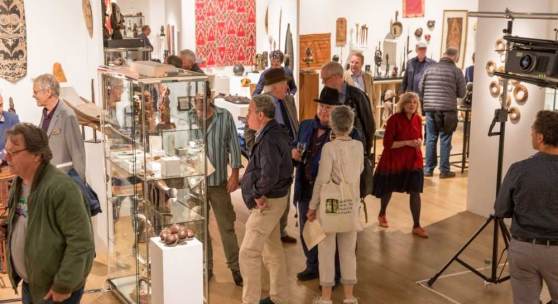 For Immediate Release: Tribal Art London is the UK’s premier collectors’ event in the field of ethnographic culture and indigenous tribal art. The fair opens 4-7 September 2019 at Mall Galleries, London SW1 with a Preview on Tuesday 3 September. Now in its 12th year, TAL 2019 takes the theme Mother, Muse and Maker, and brings together more than 20 international dealers, each a reputable specialist in fine, original purpose works of art drawn from all corners of the globe. Every item offered for sale is chosen for its quality and authenticity.

Tribal art – be it African, Oceanic or South American - centres on performance and ritual. Objects that go with these pursuits, however, are tied into the ritual of life: birth, puberty, marriage, and death. Tribal art at first glance seems male-dominated but the contribution that women have played as muses and makers is undeniably important. This year, Tribal Art London focuses on the theme Mother, Muse and Maker, not only to explore the history of women within the tribal world, but also to discuss the role they now play in the tribal art market as dealers and collectors. The ‘Mother’ figure is seen in almost every tribal African society and its meaning besides the maternal (see image above from David Malik) can also signify the protection and growth of a tribal society. A saying from the Luba people based in the Democratic Republic of Congo is ‘kingship is a woman’ meaning that to be a good ruler you must look at the traits of women.

Female beauty is also celebrated. Beauty depicted though a mask such as the Punu example from Gabon (see the image above from Bryan Reeves) not only celebrates female beauty but also harks back to important female founding ancestors. In the creation of tribal art, gender roles are strict and throughout primary societies around the world there is a tendency for men to create works out of hard objects such as wood or metal while women have focused their creative talents on softer materials such as hides, fibres, and clay. An example is cloth made of bark, known as tapa (see above illustration from Joss Graham) and common to Polynesia, which is made by the women of the tribe, who decorate it with flowers and leaves as well as iconography that depicts tribal events.

This year TAL will organise a series of tours around the fair including a focus on textiles by women and the role of adornment in tribal culture. The annual TAL Catalogue will contain articles covering the role of females in tribal societies including the importance of carved hairstyles in Sowei masks, and the roles of women in Zulu society.

With six female dealers exhibiting, TAL will also look at the women who have shaped and continue to influence the world of tribal in the UK. Through a series of interviews, we delve into what it is like to be a female dealer and collector in an otherwise male-dominated industry.

A newly published book Maternity: Mothers and Children in the Arts of Africa Tribal artefacts appeal alike to the artistically inquisitive as well as the aficionado. Buyers of every age attend the Fair, and in 2019 the organisers are delighted to welcome their youngest-ever (at 18) exhibitor, Tom Hurst, a third- generation dealer, showing at his first fair; Monika Wengraf-Hewitt with African art and artefacts, and Molly Hogg, specialist in textiles and jewellery, both from London, and Patric Claes (Brussels), a specialist in tribal art from the Democratic Republic of Congo, sharing a stand with fellow countryman and regular exhibitor Emmanuel Amelot. Newcomers Molly, Monika and Tom join the Fair’s many long-term exhibitors including co-founding organiser Bryan Reeves of Tribal Gathering and other UK-based exhibitors including Cordelia Donohoe, specialist in ethnic jewellery, textiles and adornment; Joss Graham, well-known London dealer in ethnographic textiles, particularly those of India and Africa, and works of art; Sam Handbury-Madin, a young, third-generation dealer with wide-ranging tastes; Philip Keith with a particular interest in art from Nigeria, South Africa, New Guinea, Polynesia and China; Kenn MacKay, with a special focus on American Indian art; David Malik focusing on the material culture of Central and Western Africa; Kezhia Orege with tribal adornment; Marcus Raccanello with Polynesian art, and Ian Shaw a specialist in African art. Bibliophiles head straight to the stand of Charles Vernon-Hunt, a specialist in tribal art books. From overseas come Finette Lemaire (Amsterdam), with art from New Guinea, Oceania and Indonesia; Marcuson & Hall (Belgium); Louis Nierijnck (The Netherlands) with tribal art, textiles & adornment from Africa, the Himalayas & South East Asia; Mark Eglington (New York); Jeremy Sabine (South Africa), specialist in South African artefacts; Rob Temple (Belgium) with objects from Africa, Asia and Oceania, and Frans Faber (Netherlands) with art from Indonesia, Oceania and Africa.

Tribal Art London is an important focal point for international and UK collectors. It is renowned for offering an exciting diversity of works for sale with prices ranging from the low hundreds to over £20,000. Tribal Art London attracts dealers, art institutions and private buyers from across the world.

Admission to the Fair is £5 including re-entry and a fully-illustrated catalogue with specialist articles; all proceeds are donated to EdUKaid (registered charity number 1102613). The charity works to improve education for some of the most disadvantaged children in rural Tanzania. An invitation-only Preview is held 3-9pm Tuesday 3 September; the Fair opens 10.30am daily from Wednesday 4 to Saturday 7 September. Visit www.tribalartlondon.com for further information.


TAL is the only tribal art fair of its kind in the UK, held annually at Mall Galleries, The Mall, London SW1
Tribal Art London