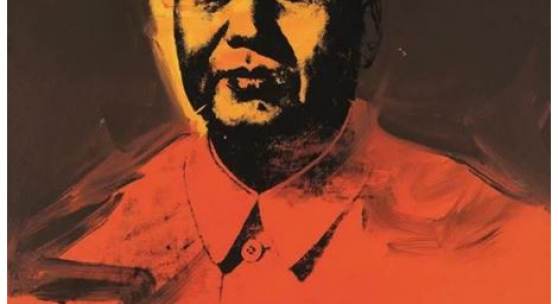 The top lot of the evening belonged to Andy Warhol’s Mao, which was sold for HK$98.5 million / US$12.6 million to an Asian collector, setting the auction record for any Western Contemporary art sold in Asia. This is also the third highest price for Contemporary Art sold at Sotheby’s worldwide so far this year.

Mao Zedong, also known as Chairman Mao and the founding father of the People’s Republic of China, is undeniably one of the most influential political figures in the world and is still revered in China as the wise and heroic leader. During the Cultural Revolution, his image was reproduced on the first page of 1966 publication Quotations from Chairman Mao Tse-tung (Mao Zedong), more commonly known as Mao’s “Little Red Book.” Party members were strongly encouraged to carry a copy with them as it contained the foundations of Maoist ideology. The book was widely circulated across the country with a print-run estimated at over 2.2 billion, which made Mao’s stern yet benevolent face one of the most extensively printed portraits in history. It is an image that is famous not because of its quality, or its depth of character, but because of its ubiquity. In Tiananmen Square, a gigantic copy of his portrait hung throughout his reign, and still hangs today. Even after more than 40 years since his death, Chairman Mao preserves power over his representation in China as before.

Andy Warhol’s dedication to all famous things in the world and his fascination of reproduction made Chairman Mao’s ubiquitous presence a mesmerizing figure of his art. His portraits of Mao are undeniably among the most influential and enduring of all his images. It was not until President Nixon’s announcement of his impending visit to China in July 1971 that Andy Warhol began to imagine painting Chairman Mao. He even made the stony observation that "Since fashion is art now and Chinese is in fashion, I could make a lot of money… Mao would be really nutty not to believe in it, it'd just be fashion but the same portrait you can buy in the poster store.” A year later, he produced a series of Mao portraits that today has become an icon to be found in many of the most prestigious art institutions and private collections across the globe. The series was first exhibited at Musée Galliera in Paris in May 1974 – a show that is now widely recognised as one of the defining moments in Warhol’s career.


Andy Warhol’s Mao, which was sold for HK$98.5 million / US$12.6 million
Sotheby’s Auktionshaus