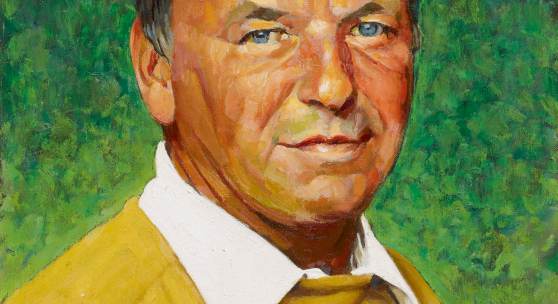 NEW YORK, 6 December 2018 – Today in New York, bidders jumped at the chance to own a little piece of Barbara and Frank Sinatra, as Sotheby’s dedicated auction Lady Blue Eyes: Property of Barbara and Frank Sinatra achieved $3.1 million, exceeding its high estimate of $1.9 million, with an exceptional 98.4% of all lots finding buyers. Drawn primarily from the Sinatras’ residences in Palm Springs, Los Angeles and Malibu, the 120+ works on offer illuminated the two worlds that the famous couple occupied: the fashionable lifestyle of a beloved entertainer and philanthropist, and the home life where the couple surrounded themselves with the people and objects they loved.

A portion of the proceeds from this week’s auctions will benefit the Barbara Sinatra Children's Center in Rancho Mirage, California, a nonprofit organization founded by the couple in 1986, which seeks to provide counseling for victims of physical, sexual and emotional child abuse.

Mari-Claudia Jiménez, Sotheby’s Chairman of the Fiduciary Client Group & Valuations in the Americas, commented: “Today’s sale invited collectors and admirers to share in the extraordinary lives of Barbara and Frank Sinatra, and bidders from all corners of the globe competed for every part of the collection – from entertainment and film memorabilia, fine art and decorative art to jewelry and more. It has been wonderful to witness the response over the last few months from collectors, longtime fans, and those learning about the couple’s life, eye and passions for the first time.”

Below is a look at highlights from across the collection:

The Sinatra’s collection of American Art performed particularly well, with three works selling for more than $300,000. The group was led by Norman Rockwell’s Sinatra: An American Classic (Portrait of Frank Sinatra), which sold for $687,000 after a four-minute bidding battle between six collectors (estimate $80/120,000). Commissioned by Frank in 1973, the portrait hung in Barbara’s Los Angeles penthouse. The collection also boasted a number of ceramics and prints by Pablo Picasso. These pieces were led by Visage Au Trait Oblique from 1968, which sold for $22,500 – over 5x its high estimate.

The significant selection of film & entertainment memorabilia on offer featured material associated with projects spanning Frank’s career in music and film. The collection of over 30 personal copies of scripts and screenplays from some of Frank’s most iconic roles were led by his revised final script for From Here to Eternity, which sold for $35,000 (estimate $7/9,000). Adapted from the novel by James Jones, and starring Burt Lancaster, Montgomery Clift, and Deborah Kerr, it is the role that won Frank an Academy Award for Best Supporting Actor.

On Tuesday, Sotheby's auction of Magnificent Jewels was led by a stunning selection of jewelry from Barbara Sinatra's personal collection, with all 39 pieces selling for a total of $4.7 million. Barbara’s emerald-cut 20.60-carat Diamond Engagement Ring, which was presented to her by Frank in a glass of champagne, led the collection, selling for $1,695,000 after an intense competition between 5 bidders (estimate $1/1.5 million).  Mrs. Sinatra’s signed jewels were highlighted by a sophisticated Mystery-Set Ruby and Diamond Butterfly Brooch by Van Cleef & Arpels, which realized $567,000 – well above its high estimate of $175,000.

All 12 pieces of Barbara’s fine jewelry featured in today’s auction sold for a combined total of $125,750, bringing the running total to $4.8 million, with more to come in tomorrow’s online-only sale.

The collection also featured a selection of iconic clothing and personal accessories the couple wore throughout their travels, special occasions or around town in Palm Springs.  The most covetable piece of clothing was Frank’s baseball-style ‘U.S. Drinking Team’ Jacket, which sold for $35,000 –70 times its $500 high estimate.  Frank had a set of these jackets custom-made for him and a group of his closest friends. His read ‘Coach’ on the back, while the others featured the last names of his friends. Other highlights include a hand-crocheted yarmulke with Frank’s name embroidered around the border, which skyrocketed past its high estimate of $500, selling for $9,375, and Barbara’s windbreaker, embroidered with ‘It’s Sinatra’s Word | We’re just living in it,’ which sold for $5,250 (estimate $300/500).

Both Barbara and Frank held a deep appreciation for sports, and were avid tennis players and golfers. Every year, the couple would host The Frank Sinatra Celebrity Golf Invitational in Palm Springs, the proceeds of which benefitted the Barbara Sinatra Center for Abused Children. During today’s auction, bidders clamored for Frank’s personal Set of Golf Clubs, with customized bag and other equipment, which fetched $27,500 (estimate $5/7,000). Custom-made in Frank’s favorite color of orange, the bag illustrates an early Sinatra nickname, ‘The Thin One.”