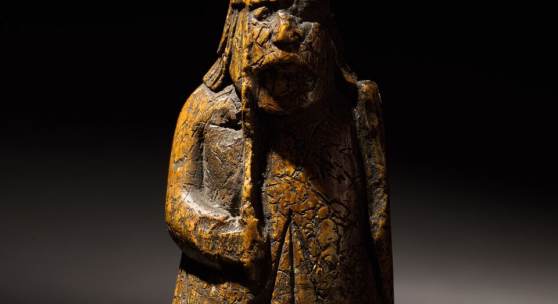 *Record for a Medieval Chess Piece at Auction*

LONDON, 2 July 2019 – A newly discovered warder attributed to the Lewis Chessmen workshop sold just now at Sotheby’s in London to an anonymous buyer for £735,000 / $927,423 – a new record for a medieval chess piece at auction. Acquired for £5 in 1964 by an antiques dealer in Edinburgh and passed down the same family by descent, the chess piece was stored away in his home before being inherited by his daughter, who believed it was special and perhaps imbued with some magical significance. The warder then passed onto the next generation of the family, who approached Sotheby’s to shed light on what was in fact an important historic artefact. Alexander Kader, Sotheby’s Co-Worldwide Head of European Sculpture & Works of Art, began a year-long study of the warder, a process that included detailed research, art historical analysis and careful comparison with the Lewis chessmen on display in UK public collections. He deduced that the chessman to re-emerge could be one of the lost pieces of the Lewis group.

Alexander Kader, Sotheby’s Co-Worldwide Head of European Sculpture & Works of Art, said: “This is one of the most exciting and personal rediscoveries to have been made during my career. It has been such a privilege to bring this piece of history to auction and it has been amazing having him on view at Sotheby’s over the last week – he has been a huge hit. When you hold this characterful warder in your hand or see him in the room, he has real presence.”

ABOUT THE LEWIS CHESSMEN
Rightly regarded as the most famous chess pieces to have survived from the medieval world, the Lewis Chessmen secured their place in history when they were found in 1831 on the Isle of Lewis in the Outer Hebrides. The hoard comprised 93 objects, the majority carved from walrus ivory, which could make four complete sets of figure pieces, with the exception of one Knight and four Warders. In addition to the 59 chessmen, there were 19 pawns and 14 flat, circular games pieces and one belt buckle (the only outsider in the hoard). Of those 93 pieces, 82 are in the British Museum in London and 11 are in the collection of the National Museum of Scotland in Edinburgh.

The remarkable hoard constituted the greatest ever discovery of medieval chess pieces, and from the moment they were unearthed, the Lewis Chessmen evoked their own mysterious world, steeped in folklore, legend and the rich tradition of story-telling. They have continued to inspire every new generation, from the classic British 1960s children’s animated television series, The Sagas of Noggin the Nog, to, most recently, Harry Potter, in the Warner Bros. production of Harry Potter and the Philosopher’s Stone, and Japanese Manga, in Hoshino Yukinobu’s Professor Munakata’s British Museum Adventure.

THE DISCOVERY
The hoard was discovered on the Isle of Lewis, the westernmost of the Outer Hebrides. However, the exact spot and how remains a mystery. At some time just before April 1831 the hoard was unearthed, apparently in the sands of Uig Strand, an inlet in the north-west of the island, although a site a little further south on the same coast has been suggested. Later accounts tell of a grazing cow accidentally revealing the chessmen. Fantastical folklore tales of ships moored in the bay, of a sailor swimming ashore clutching a bag, of murder and concealment of the hoard, of confession and a murderer hanged, all these conjectures appeared in later accounts of the find, which soon attained in the Scottish press and in legend the status of a ‘whodunnit’. Just two years after the discovery of the hoard, David Laing, a fellow of the Society of Antiquaries of Scotland, observed in 1833, ‘it is evident, that to serve some purpose, contradictory statements were circulated by the persons who discovered or afterward obtained possession of these Chess-men, regarding the place where the discovery was actually made’.

THE ORIGINS OF THE LEWIS CHESSMEN
Scholars have proposed competing theories on the origins of the Lewis Chessmen, their style and iconography not restricted to one centre. The leading theory is that they are Norwegian, and more precisely probably from Trondheim, which seems to have specialised during the 12th and 13th centuries in carving gaming pieces, often from walrus ivory. Trondheim was the seat of the archbishop of Norway, with the island of Lewis under its authority as part of the kingdom of Norway from early Viking times up to the Treaty of Perth in 1266. The theory that the Lewis hoard was the stock of a trader in chess pieces buried after a shipwreck was first proposed in the 19th century and has been the favoured explanation of their discovery ever since. The good condition of the individual pieces and their apparent lack of wear supports the theory that they were the stock of a trader in chessmen that never reached their market.

THE IMPORTANCE OF THE LEWIS CHESSMEN
Recognised as an important symbol of European civilisation, the Lewis Chessmen were included by Neil Macgregor, former director of the British Museum, in his BBC Radio 4 series, A History of the World in 100 Objects. He commented that ‘if we want to visualise European society around the year 1200, we could hardly do better than look at how they play chess. And no chess pieces offer richer insights than the… Lewis Chessmen’.