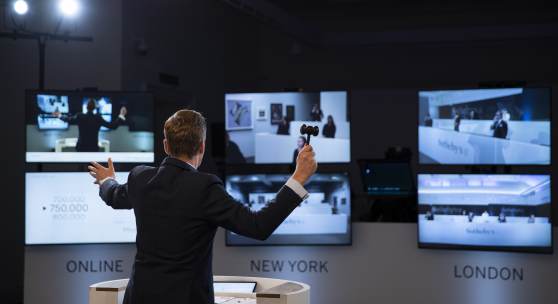 Sotheby's stages an unprecedented series of three auctions, conducted remotely by Chairman and auctioneer Oliver Barker in London, taking bids from Sotheby's specialists on phone banks in New York, Hong Kong & London, as well as online bidders. The evening sales were live-streamed to the world via seamless, real time video.

AUCTIONS LED BY: Francis Bacon’s Masterpiece Triptych Inspired by the Oresteia of Aeschylus, Sold for $84.6 Million **

WORKS BY WOMEN ARTISTS ARE 100% SOLD 25 Works by 16 Female Artists Are All Sold, Totaling $86 Million and Achieving 5 Auction Records

HIGHEST PRICE FOR ARTWORK SOLD ONLINE SET TWICE IN ONE NIGHT Joan Mitchell’s Garden Party Sells to an Online Bidder for $7.9 Million, Only to Be Surpassed by Jean-Michel Basquiat’s Untitled (Head) That Sold for $15.2 Million

Works from a Private Collection of Latin American Surrealist and Modern Art Are 91% Sold | Total $26.6 Million

29 June 2020 – Oliver Barker, Chairman of Sotheby’s Europe, and tonight’s auctioneer said, “Being on the rostrum tonight was like being at the epicentre of a cinematic production. We would never have envisioned, even a few months ago, that it would be possible to hold a series of flagship New York sales as an unprecedented live-streamed event, with banks of telephone-bidding colleagues beamed in from around the world. But, just as throughout its 276-year history, Sotheby’s was ready to pivot at a moment’s notice – and tonight we redefined the boundaries of what is possible.”

Grégoire Billault, Head of Sotheby’s Contemporary Art Department in New York, commented: “There is no artist more perfect to star in a new, ground-breaking auction format than Francis Bacon. His masterful triptych has long been celebrated in museum exhibitions, and tonight it left its mark on the market, setting a new benchmark for any bid ever cast online – $73.1 million – before hammering down as the third highest price ever paid for the artist at auction. Witnessing heated competition from New York, London and Hong Kong in real time tonight, it’s clear that the market is very much alive and that the door has been opened to the future of auctions.”

David Galperin, Head of Sotheby’s Evening Auctions of Contemporary Art in New York, said: “The depth of bidding was seriously impressive tonight, with heated competition for a wide range of works: from six bidders battling for the exquisite early 1962 Judd wall relief, to the 20+ collectors who competed for the exceptional Matthew Wong painting that opened our various-owner auction, the night was full of moments we will all remember. The enthusiasm for exceptional works of art reiterated the great demand for quality that stands strong in the market. Our sales were anchored by works emerging from two exceptional private collections. The Ginny Williams Collection began a great evening for female artists overall, and it was particularly poetic to see the same painting for which Ginny set an auction record for Helen Frankenthaler’s work in 2011 smash another record price for the artist tonight. The success of the grouping assembled by Harry W. and Mary Margaret Anderson—with landmark results for significant works by Clyfford Still, Sam Francis, and Richard Diebenkorn - was a testament to their lasting legacy as among the most transformative collectors of Post-war American art, and market yet another season of great results for postwar American abstraction at Sotheby’s.”

Julian Dawes, Sotheby’s Head of the Impressionist & Modern Art Evening Sale in New York, remarked: “We are thrilled with the results from tonight’s sale, which was marked by tremendous lot-by-lot successes, led by Pablo Picasso’s stunning Head of a Sleeping Woman, a new auction record for Wifredo Lam, and more strong results from The Vanguard Spirit, one of the most distinguished collections of Surrealist & Modern art that has come to market in recent memory. The group of Surrealist women artists from The Vanguard Spirit surged to achieve several new artist records for Leonor Fini, Remedios Varo, and Alice Rahon, with all of them and others far surpassing their high estimates. These results showcase how Surrealism continues to grow as a category to include more diverse artists from around the world and achieve new benchmarks that compete with their peers. As the market continues to embrace new artists, alongside strong results from established mainstays, there is no doubt the market remains resilient and growing, as tonight’s sale clearly showed.”