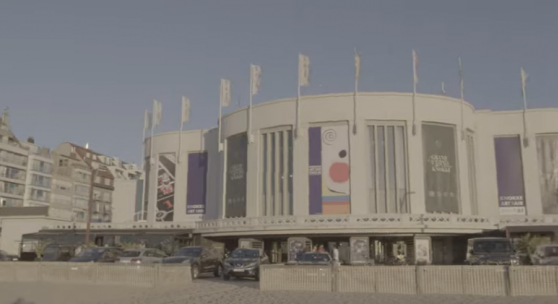 It is a unique experience visiting an art fair, not in a crowd of curious, art-loving people in party outfits, but as an individual, all on your own. It’s like being on an empty beach, surrounded by a sea of ​​beauty.

My former student in connoisseurship, Alexander Tuteleers, curator of the Knokke Art Fair, showed me around. His enthusiasm was contagious, making me look at things differently. He stands behind his project like a giant, developing this annual event into one of the best modern art fairs. You could call this art fair “established” but it also focuses attention on the contemporary: the up-and-coming young artists with potential who could one day form part of the canon of modern art. Thanks to their being chosen by Alexander, a number of them will have a chance to find a gallerist through the 'Stage' project, something that every young artist would like to do.

Back to the course (Willem Elias, Modern Art, Antwerp, Luster, 2011). The difference between 'modern' and 'contemporary' art does not really have much to do with chronology. It’s about the distinction between art on one hand, generally accepted in art history as a representation of modernity, and the adventures taken by young artists on the other. They are seeking to make an as-yet unseen contribution of their own and have yet to make their own 'label'. Perhaps Duchamp's 'Fountain' is still contemporary, or even Courbet's 'L'origine du monde'?

A thought about our time first. The importance of modern art has finally been proven after 100 years (Bauhaus 1919). The recent collapse of the antiques market is proof of that. The 18th-century display cabinet, which I received from my mother, an antique dealer, was worth €12,500 in the eighties. Today you’d be lucky to find a buyer for €300. Modern design is the new value. The tribute paid at this art fair to the greats of design symbolises this turn in culture.

Modern art makes a way of thinking, a way of living, explicit. It is not about collectibles that people like to see or unpack, as the French sociologist, Bourdieu, put it (La Distinction). It is about modern man’s self-awareness. 'Collecting' is more than 'collecting' and 'storage'. Etymology helps us to understand. The particle '-lect' in this word refers to the Latin word for reading. But that verb has an even older meaning: to be able to see the difference, to distinguish, to be able to choose. And that requires common sense: intel-lect.

The Knokke Art Fair’s second asset is the presence of a number of works of art that are gems from important collectors’ collections. Flanders has many collectors. Today, sprawling private museums are more important and more exciting to visit than the public museums headed by officials or know-it-alls.

Talking about the government … On entering the stately casino hall, one finds it hard to believe an announcement posted between photos and a video of Flanagan's hares. For years, 'Sculpture Link' has provided an open-air exhibition of sculptures throughout Knokke, supported by sponsorship. This year it was a retrospective of Flanagan. Surely the images weren't dragged away! "Have you got me now!" the Dutch would say. The gap caused by the visual censorship of the sculpture route, which was to become the prelude to the Art Fair, was symbolically replaced at the entrance by a modern work by Bernar Venet with its metal circles and a 'young promise', David DeBusseré. The chalk lines are drawn.

We are not going to name the artists exhibited, a small catalogue does that. Still, just to mention a few: Andy Warhol, Damien Hirst, Banksy, …

“Ça vaut le détour,” as they say in Brussels. Could it be improved? Of course. That is always the case with art fairs. There is a “something for everyone” attitude that I find at Art Brussels. In any case, I don't want to do anything other than wish Knokke Art Fair further expansion. Knokke needs something like this.