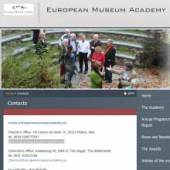 The Akademia was historically a school dedicated to Athena, the goddess of wisdom, outside the city walls of ancient Athens. Today an Academy is an institution of higher learning, research and honorary membership. The Academy is the scenario where innovations are deeply discussed and widely validated. Innovations concerning the museological philosophy, the museographical language and practice as well as the role of museums in contemporary society. Although museums started a long time ago, they are still searching for their own identity. Europe has probably given the main contribution to the big family of museums. That's why this is the very moment when a European Museum Academy is needed.

Background
The European Museum Academy, registered as a non-profit foundation in The Netherlands, was established on the occasion of the tenth anniversary of the loss of the distinguished museologist Kenneth Hudson (1916-1999) by a group of professionals active in the museum field and the cultural sector in general, this group has worked with Kenneth Hudson for many years in the context of the European Museum of the Year Award scheme, under the auspices of the Council of Europe and under the patronage of HM Queen Fabiola of Belgium, in the area of industrial archaeology and in other fields which benefited from the pioneering of Kenneth Hudson.

Aims
The aims of the European Museum Academy are to preserve the legacy of Kenneth Hudson and to disseminate the values and the pioneering intuitions and views of his museological thinking among the new generations of museum professionals as well as cultural professionals active on a European scale. The EMA Foundation is engaged in developing researches in the field of museum innovation, stimulating new ideas and experiences and offering its services as an incubator for new talents and new programmes in order to improve the quality of museum services and of the museological discourse at the European level. The academy is not an educational organization (although regularly involved in professional training and exchange programs), but intends to be a society of museum experts of different national and cultural backgrounds united for the advancement of museological knowledge based on a curriculum of proved capacity in carrying out innovative museum projects. The academy identifies in museums a relevant tool to face socio-economic and cultural challenges in contemporary society and stresses the role of the modern museum as a meeting place and as a most promising forum for the development of scientific debate, creativity, social cohesion and cultural dialogue.