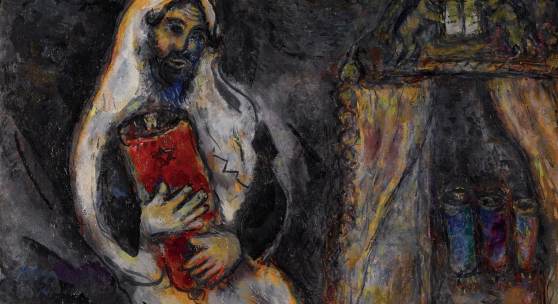 NEW YORK, 2 December – Sotheby’s annual New York auction of Israeli & International Art on 15 December 2016 spans a century of Israeli art, including significant examples from all major movements represented by this diverse collecting field. In addition to a rich selection of works by Reuven Rubin, Moshe Castel, and Mordecai Ardon, the sale includes significant examples by New Horizons artists Joseph Zaritsky and Avigdor Stematsky, as well as cutting-edge contemporary photography and video by artists like Ori Gersht and Ronen Sharabani. The auction is led by Marc Chagall’s poignant painting Juif à la Thora (est. $1.5/2 million, above). The sale will be on view in our York Avenue galleries from 10 December through 15 December, alongside the auction of Important Judaica.

CHAGALL’S HOMAGE
Painted between 1968-78, Juif à la Thora is a magnificent homage to the artist’s Jewish heritage and upbringing. The painting depicts a young Jewish man, wearing Tefillin and wrapped in a long Tallit, holding a Torah in a loving embrace as he floats above the village below. To the right, a fully rendered open Ark reveals additional Torah scrolls and prayer books, lit from within by a golden glow. The figure exudes power and strength – a potent symbol of survival and renewal in spite of all adversity. The intensely-Jewish subject is derived from a drawing which Chagall executed in the aftermath of the Second World War in 1947 and later used as the frontispiece of his friend Joseph Opatoshu’s book, The Last Revolt, The Story of Rabbi Akiba, 1948. The painting remained in the collection of the artist’s family for almost 30 years following his passing in 1985.

PROPERTY FROM THE BEN URI GALLERY AND MUSEUM, LONDON
Founded in 1915, Ben Uri is Britain’s oldest Jewish cultural organization. Originally an ‘Arts Society’ designed to provide support for Yiddish-speaking, Jewish-émigré artists and craftsmen working outside the cultural mainstream, Ben Uri’s founders nursed the ambition of building a National Museum of Jewish Art by assembling a permanent collection of work by Jewish artists – which, given the time and circumstances, was a grand and visionary objective. Today it comprises over 400 artists from 35 countries of birth, and, uniquely, among national collections, two-thirds of the artists are émigrés, and over a quarter are women. The collection is widely recognized as a unique and distinctive visual and academic survey of Jewish artistic and social life during the 19th, 20th and 21st centuries in Britain. The proceeds of the sale will benefit the museum's strategic development plans for its second millennium of public service, including wider engagement both nationally and internationally.

The group of 12 works on offer this December includes three paintings by Moshe Castel, led by Father and Son (est. $40/60,000, left). Painted in 1928, the narrative of this work expresses the specific relationship the figures have to one another and to the neighborhood they are strolling through. The theme of figures walking through their home environments is carried on throughout Castel’s career into the 1930’s, and visual elements like the red belt became a painterly signature. It has been suggested that the work could even be a self- portrait of the artist as a child, walking hand-in-hand with his own father, Rabbi Yehuda Castel.

SEMINAL WORKS BY REUVEN RUBIN
The auction features 10 works by renowned Romanian-born Israeli painter Reuven Rubin. This group includes a superb work from the late 1920’s, Boy with Goldfish (est. $150/250,000, right) and a 1930’s Self-Portrait from the Ben Uri Gallery and Museum collection (est. $200/300,000, below). Boy with Goldfish is a charming 1929 portrait depicting a young boy from the artist’s Tel Aviv neighborhood, delicately grasping a goldfish. The subject of a fisherman and his catch recurs in Rubin’s works throughout his career, expressing the artist’s view of man in harmony with nature.
Rubin’s vivid Self-Portrait from 1937 shows the artist at work on an unseen canvas, with a vase of delicately rendered flowers by his side. The work reflects a turning point in the artist’s career, as he veered away from his signature naïve style of the 1920s, full of symbolism and storytelling with a flattened composition, to a more painterly style with an exaggerated emphasis on color, light and texture.

A MYSTERIOUS PORTRAIT BY MORDECAI ARDON
Mordecai Ardon’s Parable of 1 x 1 is a highly important self-portrait of the artist as a boy that exemplifies the exact moment in which the artist abandoned the naturalistic approach of his early self-portraits and developed a language of symbols to describe thoughts and feelings (est. $180/250,000, right). In Parable of 1 x 1, Ardon, the student, sits at a table studying a geometric equation, as a mouse runs across a path leading into a trap. The artist confronts the universal yearning for answers or solutions to life’s deepest mysteries, symbolized here by a simple geometric equation. In December 2014, Sotheby’s set a record for the artist and a record price at auction for any Israeli artist with Ardon’s 1969 canvas The Awakening, which sold for $821,000.