One of the Most Valuable English Books To appear at Auction 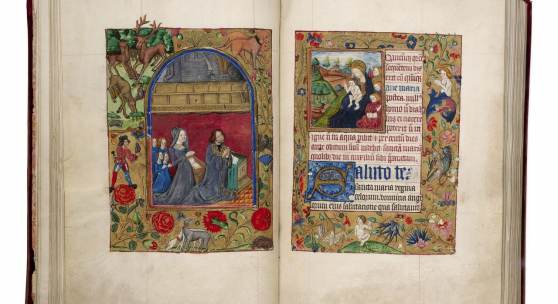 London, 30 November 2016 - The Bute Hours, one of the most extraordinary Medieval English Book of Hours in existence, is to be auctioned at Sotheby’s London on 6 December 2016, with an estimate of £1.5 to 2.5 million, making it one of the most valuable English books to appear at auction. The manuscript comes to sale from The Berger Collection Educational Trust, set up by the Denver-based collectors William M. B. Berger and Bernadette Berger, who amassed one of the most important collections of British Art in America, spanning over 600 years. The proceeds will go to benefit future philanthropy.

English Books of Hours are extremely rare on the market, and the richness of the illustration of this particular manuscript is unparalleled - a reflection of the significant social status of its patron.  Including more than 50 large miniatures, it was most likely made for a nobleman of the royal household who is depicted with a double chain of office, his wife, children, and dogs, throughout the book. In fact, the book is so lavish that it’s even been suggested that it was made the young prince Henry (the future Henry VIII).

The book dates from c. 1500-20 – a time when plague swept across London. An image of St Roche (the patron saint against the plague) appears in prime position at the front of the book, immediately after the Trinity, the Holy Spirit and the Virgin Mary. The Welsh healing saint, St Armel, loved by Henry VII, is also invoked so that the user ‘shal be relesyd of all maner of sikenesse & soris’. The Plague broke out in London twice at the end of the Middle Ages, in 1499-1500 and again in 1537-9; the latter is too late for this Book of Hours but the earlier date seems possible.

The manuscript takes its modern name from the Marquesses of Bute, whose ancestral home is on the Isle of Bute, off the west coast of Scotland. The family traces its ancestry back to the 12th century, and is descended from Kings of both Scotland and the United Kingdom. The manuscript was acquired for the Bute library by John Crichton-Stuart, 5th Marquess of Bute, who died in 1956; it passed with the title and properties (including six castles and an important art collection) to his eldest son John Crichton-Stuart. In 1983, he sold a number of illuminated manuscripts at Sotheby's, including the Bute Hours.

The Berger Collection Educational Trust, Sold to Benefit Future Philanthropy
The Bute Hours comes to sale from the Berger Collection Educational Trust, sold to benefit future philanthropy. Both natives of Denver, William M. B. Berger and Bernadette Berger began their collecting activities in the 1990s with a passion that has rarely been matched. Over the course of just a few years, they amassed one of the most important collections of British Art in America, spanning over 600 years, as well as excellent examples of French, Italian and American paintings and drawings. The Bergers were dedicated to using art as a vehicle for education: “We have always believed that art, as well as music, poetry, and literature, refreshes and enriches our lives”, they said. In order to further their mission, they founded the Berger Collection Educational Trust.

The Trust’s mission focuses on British Art, culture and history, and uses the collection that the Bergers created to further its goals. It has sponsored numerous exhibitions throughout the United States devoted to British painting, as well as being a major supporter of the British Art Journal. The Trust administers, together with the Journal, the highly prestigious William M. B. Berger Prize for British Art History, awarded for excellence in the field. In addition to the Bute Hours, a number of properties from The Berger Collection Educational Trust, will be sold at Sotheby’s New York & London in 2016 and 2017 to benefit future philanthropy.