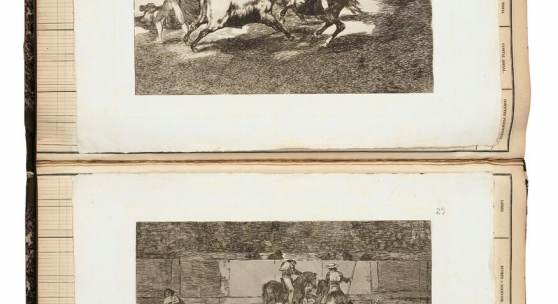 LONDON, 13 March 2017 – This Spring, Sotheby’s will offer at auction a masterpiece of Spanish printmaking recently discovered in a library in France. La Tauromaquia, the complete set of thirty-three prints by Goya celebrating the artist’s unique understanding of the art of bullfighting, comes to sale from the collection of a French ducal family, having remained undisturbed for decades in a nineteenth-century ledger. Estimated at £300,000-500,000, the prints are virtually flawless examples of the first and only contemporary edition that was printed for Goya from large copperplates etched and aquatinted by him in 1815-1816.

Having made the journey from the court of Madrid around the time of their publication, to the château de Montigny in France in 1831 where they remained – eventually forgotten by succeeding generations of the original owner – these exceptional works by an inspired master printmaker will headline Sotheby’s sale of Prints & Multiples in London on 4 April 2017. Séverine Nackers, Head of Prints, Sotheby’s Europe, said: “To find a complete set of Goya’s bullfighting prints with such historically significant provenance is a once-in-a-lifetime discovery. With La Tauromaquia currently holding the auction record for a series of prints by Goya, we’re expecting an enthusiastic response from collectors.”

The prints were discovered when new heirs inspecting the family property pulled a large nondescript volume from the back of a library shelf, full of splendid bindings. On first inspection, the nineteenth-century ledger revealed 90 lithographs bearing the signature H. Bellangé pasted onto its pages, showing brightly watercoloured prints of uniformed French military personnel. A glance beyond the two blank facing pages that followed, in what appeared to be a ‘scrapbook’ volume of prints, revealed a surprising discovery –– another series of prints, this time in monochrome, a warm, dark umber ink on freshly textured, handmade paper. They were immediately recognisable as masterpieces by the hand of Goya, from the quality of the materials and the fresh and perfect condition of their technique. These prints have evidently lain undisturbed within the album, ever since each one was carefully tipped, with touches of glue to the four corners, sideways on the pages, an operation that appears to have been carried out in the 1840s, following the death of the original owner in 1837. The ledger, with printed columns and headings, was perhaps chosen because its format fitted the uncut sheets so well.

The original owner of this set of Goya’s Tauromaquia was Anne Adrien Pierre de Montmorency Laval (1768-1837), whose inheritance of the family title of marquis de Laval led him to attend the court at Versailles. He joined the French army, but fled to England as an émigré during the French Revolution. Back in France after 1800, he came to prominence following the defeat of Napoleon and the return of the Bourbon monarchy. The reign of Louis XVIII coincided with the return to Spain of Ferdinand VII: both Bourbon kings were re- established on their thrones in May 1814, and in August, Anne Adrien, now known as prince de Montmorency Laval, was appointed ambassador to the Court of Madrid, where he would have arrived while Goya was still working on his heroic paintings of the Second and Third of May 1808, commemorating the Spanish resistance during Napoleon’s occupation and intended for the royal palace. The situation was initially complicated by Napoleon’s return to Paris from Elba, but the French ambassador decided to remain in Madrid during this difficult period, and in February 1816 he was richly rewarded by Ferdinand VII who conferred on him the title of duque de San Fernando Luis with the rank of Spanish grandee, and the Order of the Golden Fleece.

Though cleared of collaboration with the Bonaparte régime, Goya was forced to abandon all hope of publishing his etchings of the horrors of the recent war. He embarked instead on a new and publicly acceptable project to illustrate the origins, development and contemporary state of the art of bullfighting – in effect, ‘popular’ subject matter. The set of thirty-three prints was advertised for sale in October and December 1816, by which time the French ambassador had been resident in Madrid for two years. The new duque de San Fernando Luis may have purchased this fine, early set of the bullfight prints or received them as a gift from the crown. He remained in place in Spain until 1823 and went on to other ambassadorial posts in Rome and Austria, and at the Court of St James in London. His career ended with the revolution of July 1830, and his refusal to swear allegiance to Louis-Philippe d’Orléans who succeeded as king of France. In 1831 he acquired the château de Montigny, where he built a major extension for the display and enjoyment of the many acquisitions made in the course of his diplomatic career. On his death in 1837, all his properties were inherited by his daughter and her husband, Athanase de Lévis, marquis de Mirepoix, who assumed the family titles including that of second duque de San Fernando Luis. It is his name and Paris address that are inscribed in the register, probably in connection with the mounting of the Bellangé and Goya prints in the volume which was placed in the library at Montigny.