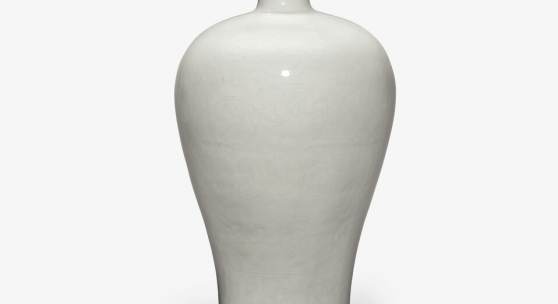 NEW YORK, 15 March 2017 – This morning, Ming: The Intervention of Imperial Taste, an exploration of imperial influence and technical refinements under the 300-year reign of the Ming Dynasty, launched Sotheby’s Asia Week New York auctions, achieving $11,339,000, comfortably within its pre-sale estimate. Undeterred by winter storm Stella, collectors from around the world gathered in Sotheby's headquarters to view, handle and bid on these magnificent works of art. In front of a      

packed salesroom, 92.9% of lots sold in this morning's sale – led by An Exceptionally Rare Anhua- Decorated Tianbai-Glazed Meiping – with 61.5% selling over the high estimate.

Angela McAteer, Head of Chinese Works of Art in New York, commented: "This was a great way to start our Asian Art sales in New York. This auction of treasures from the Ming Dynasty is an indicator of the tremendous global appetite for the highest-quality Chinese porcelain.”

The top lot of this morning’s themed-sale was an Exceptionally Rare Anhua-Decorated Tianbai- Glazed Meiping (first page). Poetically described by writer Huang Yizheng as ‘immaculate like piled- up snow’, the luminous white glaze reveals beautiful incisions of intricate peony scrolls and lotus sprays, perhaps hinting to the promise of spring. Against a pre-sale estimate of $2.3/2.8 million, this technical marvel of pottery, glaze and design sold for $3,132,500.

An Exceptionally Rare and Large Fine Blue and White Reserve- Decorated ‘Peony’ Dish, one of four known to exist, also found significant interest in this morning’s auction. Prized for its meticulous application of the blue cobalt glaze, the dish was chased by five bidders in the room and on the telephones. Sold to the room for $2,172,500, the Xuande Mark and Period work of art surpassed its pre-sale estimate of $1/1.5 million.