Roman Statues from Poolside in Jamaica 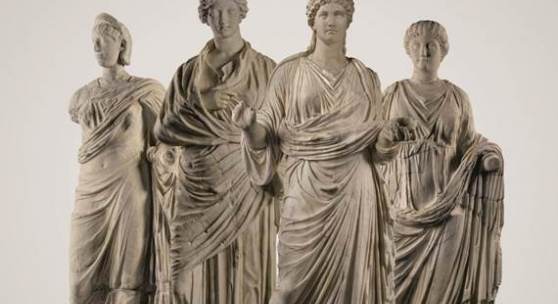 Sotheby’s London, May 2017: An auction dedicated exclusively to the classical world, Ancient Marbles will take place on 12 June at Sotheby’s London – offering ancient sculpture and works of art from the Greek, Roman and Etruscan periods. Since the Renaissance, collecting ancient classical marble sculpture has been considered synonymous with good taste and the apex of culture, and Sotheby’s exhibition will draw on these roots whilst also presenting the pieces in a contemporary context. The auction will be led by a Roman marble bust of a military officer, a striking piece that depicts a single sitter yet represents an entire era – acting as a reminder of the way in which antiquities have influenced artists throughout history, who continue to use portraiture as a representation of their times. Many artists themselves have been avid collectors of classical sculpture, from Rubens through to Cy Twombly. With estimates ranging from £2,000 to £500,000, the sale presents an opportunity for first time buyers as well as seasoned collectors.

A further highlight is a group of four ancient Roman statues that have been set in a stunning colonnade around a swimming pool in the opulent ‘El Cerro’ villa in Jamaica for half a century. In 1968, Douglas and Diene Cooper, jewellers from Philadelphia, inaugurated El Cerro – their magnificent new villa overlooking Montego Bay. Everything at El Cerro reflected the luxurious lifestyle of Philadelphia’s high society, from the octagonal living room echoing the shape of a diamond to the Michelangelo-esque painted frescos and toga parties. These ancient statues will now be returning to London, having been acquired here in the 1960s, in what is a rare opportunity to acquire four statues of this scale at the same time.

Florent Heintz, Sotheby’s Worldwide Head of Ancient Sculpture and Works of Art, said: “The storied pasts of ancient marbles are central to their allure, transporting the viewer back thousands of years and capturing the imaginations of institutions and private collectors alike. This can be felt particularly in the top lot of the sale, the magnificent Roman bust, whose character shines through from the exuberance of his hair to the direct power of his gaze. The interest in the field has been expanding in recent years, with a growth in Medici-style collectors who wish to live with the best of the best – be it an antiquity or a contemporary artwork.”