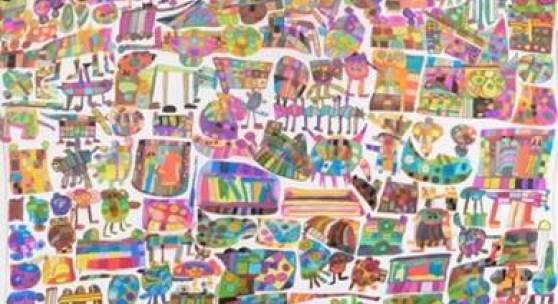 Since it was founded over a decade ago, award-winning charity Outside In has worked to provide a platform for artists who find it difficult to access the art world – whether these barriers were due to health, disability, social circumstances or isolation. In January, Sotheby’s galleries in New Bond Street will tell the story of the journey taken by Outside In so far and the dynamic roster of artists who have led the way. Highlights include James Lake’s life-size figure of a runner made entirely of cardboard, meticulous ink drawings by musician Nick Blinko and energetic paintings by Rakibul Chowdhury which combine everyday life with pop culture. The ground-breaking exhibition will go on view from 11 – 19 January, open 9am – 4.30pm Monday – Friday. Throughout its eleven-year journey, the objective of Outside In has remained the creation of a fairer art world – rejecting traditional values and institutional judgements about whose artworks can and should be displayed. Bringing together 2,500 artists worldwide, the charity’s diverse network gives an insight into the inspirations and imaginations of those who possess an extraordinary pictorial vocabulary and innate technical talent despite the lack of formal art training.

Frances Christie, Head of Sotheby’s Modern & Post-War Art said, “We are very excited to be hosting this exhibition for a charity that does such critical work, supporting artists who otherwise might not have the opportunity to find their artistic voice and allowing them the freedom to unlock their talents – creating, along the way, works that I for one find hugely inspiring.”

Marc Steene, Director of Outside In said, “As Outside In looks to the future, our exhibition celebrates some of the 5,000 artists we have worked with over the past eleven years. It points to a new and exciting future, where the charity will be able to continue and expand its vital work bringing to light and celebrating the talent of artists too often ignored and on the margins of society and the art world.”

HIGHLIGHTS ON VIEW
Manuel Bonifacio, Motorbike and Man, colouring pencil on paper, 2012 (illustrated on p.1) Born in December 1947 near Lisbon, Portugal, Manuel Lança Bonifacio’s learning difficulties led to his dropping out of the formal educational system at the age of eight. Instead, he turned to artmaking, and developed a passion for drawing and ceramics, a passion that has persisted to the present day and one that allows him to expose his unique view of the world. Manuel joined the fire brigade as a volunteer at a young age. His life's ambition was to be in the army, and many of his works reflect this passion for army transportation; depicting helicopters, aeroplanes, motorbikes and boats. Manuel has shown his work at the Outside Art Fair in Paris and the Outsider Art Fair in New York, with pieces acquired by numerous private collections. He makes much of his work at ArtVenture, a creative day centre in Guildford. James Lake, Running Figure, cardboard, 2012 ‘The running track doesn’t have an end point. “What’s next” was at the back of my mind when I was making it’ – the artist Creating large-scale cardboard and paper sculptures, James Lake’s medium of choice blurs the boundary between high and low art – which he believes makes his artwork more accessible. His sculptures are based on the themes of humanity, strength, and vulnerability. This impressive and graceful figure of a runner about to take off is an original commission for the Gold Run, an Arts Council funded project celebrating the London 2012 Paralympic Games comprising of the first learning-disabled led opera and art project. The artwork made for Gold Run explored the reintroduction of learning-disabled athletes into the Paralympic games after a twelve-year ban. Rakibul Chowdhury, Ophelia after painting by Millais, acrylic and watercolour on paper, 2017 Rakibul Chowdhury’s work explores the relationship between everyday life and popular culture, incorporating images of pop stars, movie legends, fashion icons and beloved cartoons. This piece is based on pre- Raphaelite artist John Everett Millais’ classic depiction of Shakespeare’s Ophelia, yet unlike the original, this Ophelia is surrounded by celebrities holding the gaze of the viewer.