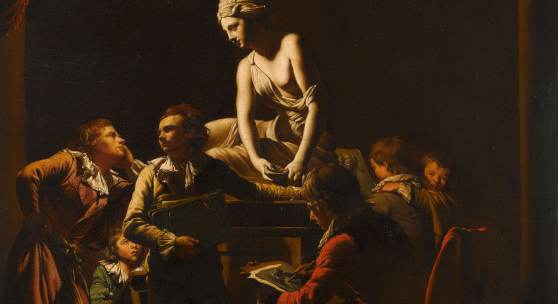 The genius of Joseph Wright of Derby A.R.A. (1734-1797) will come under the spotlight this winter, when one of the artist’s most important candlelit pictures, and one of his last major works remaining in private hands, appears at auction at Sotheby’s. Painted in 1769, An Academy by Lamplight is a supreme example of Wright’s dramatic rendering of light and shade and his association with the Enlightenment movement. Almost certainly the picture that Wright exhibited at the Society of Artists in 1769, this rare painting was first securely recorded in the collection of Sir Savile Crossley, 1st Baron Somerleyton (1857-1935), the scion of a great carpet manufacturing dynasty from Halifax, and has remained in the possession of his family ever since. One of the star lots of Sotheby’s London Old Masters evening sale on 6 December 2017, it will be offered with an estimate of £2.5-3.5 million, the highest estimate for a work by Joseph Wright of Derby ever at auction.

Julian Gascoigne, Senior Specialist, British Paintings at Sotheby’s said: “Joseph Wright of Derby is one of a small and select group of British eighteenth-century artists whose work transcends national boundaries and speaks to a wider global sensibility. Drama and passion are at the core of his oeuvre and this is particularly true of this exceptional painting. The artist’s masterful use of light brings to life the sensual antique statue and brilliantly captures the contemporary aesthetic infatuation with the art of the past. With its overt reference to the classical legend of Pygmalion, and the transformative power of art, this is one of the most important works by the artist to come to the market in recent years and we look forward to presenting it to collectors around the world.”