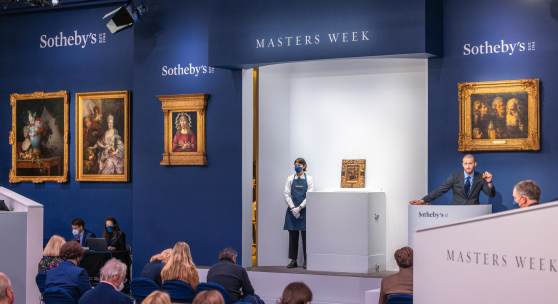 Sotheby’s Masters Week Sales Continue, with 5 more sales to come including,
Master to Master: The Nelson Shanks Collection & The Europe

Christopher Apostle, Head of Sotheby’s Old Masters Painting Department, New York, said: “As the first major sale of 2022, today’s auction result is a resounding vote of confidence for the international art market and the market for Old Masters. The sale was sourced globally, and sold globally to a broad international spread of buyers, with collectors hailing from across the United States, Europe, Russia, and Asia. Altogether, there was very strong bidding across the sale and at every price point, led of course by Botticelli’s Man of Sorrows, but with excellent results throughout.”

George Wachter, Sotheby’s Co-Chairman of Old Master Paintings Worldwide, added: “The exceptional results for today’s sale showcased the depth of the Old Master market: from Italian Renaissance masterworks, to an extraordinary group of works by leading female artists, including a record-setting price for Anne Vallayer-Coster, to a variety of paintings from the Dutch Golden Age and beyond. We also had the great privilege of offering the restituted masterwork by the French regency painter Nicolas de Largillière, which was recently returned to the heirs of the renowned collector Jules Strauss, and continues the critically important efforts in reclaiming the histories of the art and lives irreparably damaged during the Nazi regime."