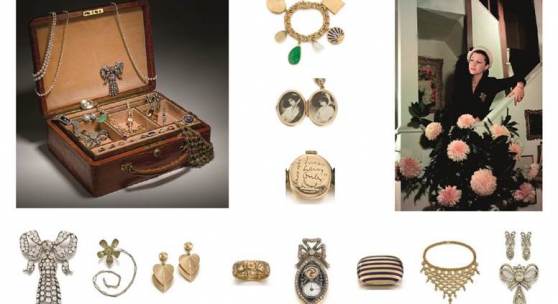 Two of the charms in this highly personal bracelet commemorate some of the most memorable achievements of Vivien’s career. Her performance in Gone with the Wind (1939) is commemorated by a charm designed as the novel by Margaret Mitchell from which the film was adapted, the interior pages revealing both her name and that of her character, Scarlett O’Hara.  Similarly, the oval locket contains a recreation by Vivien of a painting of the famous entertainer and muse Emma, Lady Hamilton by George Romney. Vivien starred as Lady Hamilton in the 1941 film opposite Laurence Oliver, who played Vice Admiral Horatio Nelson. The four remaining charms comprise a round charm with a design of a boat against a sunset, the sky of blue chalcedony (most likely commemorating a special time for Vivien and Larry, perhaps their honeymoon on actor Ronald Colman’s yacht in 1940), a jadeite pendant carved with a design of a bat, and two chalcedony drops.

This watch is likely to have been a gift from Larry to Vivien for Christmas 1940, marking their first Christmas together as a married couple. The exuberance of the inscription to the reverse, in Olivier’s own handwriting, speaks volumes of his joy at finally being married to his ‘Darling’. Vivien clearly loved the watch, as she was often photographed wearing it at numerous points throughout her life, in private and public. She also appears wearing the watch on the sets of some of her most celebrated films such as The Roman Spring of Mrs Stone (1961).

This token of love between Vivien and Larry is inscribed to the interior Laurence Olivier Vivien Eternally, in Olivier’s own handwriting.

Probably a gift to Vivien on the 12th October 1949, the opening night of A Streetcar Named Desire at the Aldwych Theatre, London. The theatrical production of Tennessee Williams’ play was directed by Olivier, whom was possibly the giver of this present.

The Chrysoberyl Demi-Parure, comprising a devant-de-corsage designed as a bow suspending a detachable pendant and a pair of earrings of similar design (est. £4,000-6,000)

A photograph from December 1962 shows Vivien wearing the brooch from this parure whilst rehearsing with Jean Pierre Aumont for the Broadway musical play Tovarich (1963), which earned Vivien a Tony Award for Best Actress in a Musical. She also appears in numerous press photographs of the period wearing the earrings which were often favoured for evening wear by her, most famously, on the occasion of the re-premiere of Gone With the Wind in Atlanta in 1961.

Vivien wore this bracelet in many of the key scenes in Ship of Fools (1965). Her last on-screen performance as the glamorous but troubled divorcée Mary Treadwell was met with considerable acclaim, both from her co-stars and from critics, who awarded her with the Étoile de Cristal for Best Foreign Actress.