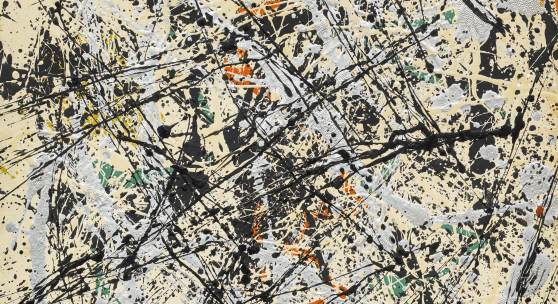 HONG KONG, 29 March 2018 – Sotheby’s is delighted to announce that Number 32, 1949 by Jackson Pollock will be featured in our Contemporary Art Evening Auction on 16 May 2018 in New York. The production of the artist’s drip paintings of 1948-9 stands as one of the most radical events in 20th-century art, in which the boundaries of painting were pushed and a new aesthetic established. Number 32, 1949 comes from a critical year for the artist and epitomizes the chaotic vibrancy, heroic drama and thrilling vigor that have come to define Pollock’s prodigious legacy. Acquired in 1983 and held in the same esteemed private collection for over 35 years, the work will be unveiled in Hong Kong on 29 March before travelling to Los Angeles and London, with the New York exhibition opening on 4 May.

Jackson Pollock executed his first drip painting in 1947. Over the next two years he would hone this now instantly recognizable, signature technique, producing the monumental Autumn Rhythm (collection of The Metropolitan Museum of Art, New York) and Number 1A, 1948 (collection of The Museum of Modern Art, New York). Number 32 is one of a small number of more intimate 1949 paintings in which the artist more fully explored the subtleties of the drip technique. It was featured in the second of two shows that year at Betty Parsons Gallery about which Robert M. Coates wrote in the New Yorker “They seem to me the best painting he has yet done.”

Exceptionally rare, Number 32 is one of a very limited group of 16 drip paintings Pollock created on paper mounted on Masonite or canvas in 1949 and one of only eight that feature the aluminum paint that creates a lustrous shimmer around his elaborate gestural movements. Boasting a fully painted surface with intricate layers of dripped and poured oil, enamel, and aluminum paint, the work has one of the most complete and richly covered surfaces of the entire series; indeed the last time a painting of this composition was offered at auction was in May 2013, when it set a record price of $58.4 million. It is further distinguished by a dense composition of black and silver splatters offset by bursts of brick red, bright orange, sunflower gold, and vibrant sea green that extend to the very edges of the paper. Other examples from this limited group reside in prestigious collections including the Solomon R. Guggenheim Museum, New York and The Munson-Williams Proctor Art Institute, Utica, New York.