Scottish Colourists from the Harrison Collection 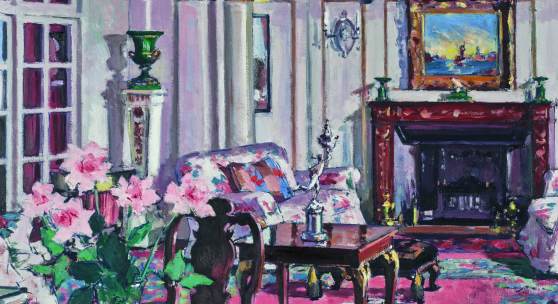 LONDON, 8 May 2018 – This summer, Sotheby’s will offer at auction one of the most exceptional collections of Scottish Colourist works in private ownership. Featuring some of the finest Colourist paintings by George Leslie Hunter, Samuel John Peploe, Francis Campbell Boileau Cadell and John Duncan Fergusson, The Harrison Collection was formed in the 1920s and 1930s by Major Ion Harrison, an important patron and close friend of the artists. Comprising 31 works, the group of paintings, watercolours and drawings will be presented in a single-owner sale in London on 12 June 2018, as part of Sotheby’s Modern British Art Week. Passed down through the family, the works remained together at Croft House, Major Harrison’s home where he openly welcomed the Colourists.

Thomas Podd, Sotheby’s Scottish Art Specialist, commented: “Visiting Croft House for the first time was an experience that will live long in the memory. Crossing the threshold and walking into the elegant reception hall, one was greeted with Cadell’s masterpiece ‘The White Room’ and its harmonious tones of white and grey punctuated with flashes of dazzling colour. Through the hallway, lined with watercolours by Hunter filled with Provençal warmth, and into drawing room, one’s eye was instantly drawn to Cadell’s ‘The Drawing Room, Croft House’, hanging in the very same room it depicts, with the majority of furniture and artworks unchanged some eighty years later. It is hard to imagine a work that encapsulates so perfectly the spirit of an entire collection. With its balanced composition and sophisticated application of colour, the painting is not only the ultimate Colourist statement, but it speaks also about the collector and his friendship with the artists whose works lined the walls of his beautiful home.”

Major Ion R. Harrison, a Glasgow ship owner, first encountered the work of the Colourist artists in 1921 when, encouraged by his friend Dr Thomas John Honeyman, later Director of Glasgow Art Gallery, he attended an exhibition at ‘Alex. Reid & Lefevre’ on West Street in Glasgow of paintings by Samuel John Peploe. It would be three more years before Harrison purchased his first work by Peploe, swiftly followed by a number of paintings by George Leslie Hunter. Not long after Harrison purchased his first painting by Cadell, The Pink Azaleas which became a particularly cherished painting in the collection. Ion Harrison’s recollections of the Colourists are elegantly recorded in a chapter at the end of T.J. Honeyman’s Three Scottish Colourists (Edinburgh, 1950) poignantly titled As I Remember Them. It is this close personal relationship between Harrison and the artists that gives the collection such an incredible sense of immediacy.

The term ‘Scottish Colourists’ has now become inextricably associated with the work of Cadell, Fergusson, Peploe and Hunter, but the moniker was only coined in 1948 when three of the four were already dead. The Colourists were arguably the most avant-garde British artists of their day, and whilst they were Scottish by birth, their brightly-hued still-lifes, shimmering interiors and vibrant landscapes, are essentially French in spirit. The spark of their artistic inspiration had been found in Paris at the turn of the twentieth century – a time when the city fizzed with modernity and artistic expression. In the summer of 1924 all four Colourists exhibited their works together for the first time, in an exhibition entitled Les Peintres de l’Ecosse Moderne at the Galerie Barbazanges in Paris. By this time the artists had reached their maturity but they continued to seek new subjects for their art and to be influenced and inspired by contemporary art.

The pictures in the Harrison Collection represent such a broad range of styles, subjects and dates by all of the four Colourists that they present an opportunity to assess the differing influences and themes that link them together or contrast them.