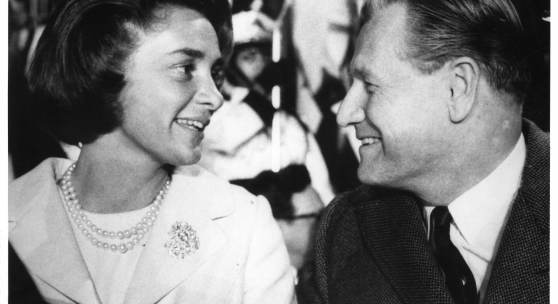 450+ Objects to Be Offered across a Series of Sales in New York Featuring:

NEW YORK, 24 September 2018 – Sotheby’s is honored to announce that we will offer property from the Collection of Nelson & Happy Rockefeller across a series of auctions beginning this November in New York.

Passionately assembled with wide-ranging interests and an unwavering eye for quality, this remarkable group is not only tied to one of America’s most storied families, but is also a significant and pioneering collection in and of itself. Spanning important design, fine art, exquisite jewels, rare porcelain, Chinese art, furniture and European decorative arts, Nelson and Happy’s collection expresses, as Nelson himself once stated, “the spirit of the time” in which they lived.

On 13 November, Sotheby’s will hold an auction dedicated to an important group of 20th Century Design, Impressionist & Modern and Contemporary Art originally housed in Nelson and Happy’s celebrated 5th Avenue apartment in New York. Titled A Modernist Vision, this exceptional group of objects is in part the result of Nelson’s commission of an original interior from Jean-Michel Frank, who, in close collaboration with his patron, filled the residence with his unique designs, as well as those of celebrated artist-designers Alberto Giacometti and Christian Bérard. Following the completion of the commission, Rockefeller, with the advice and guidance of Alfred Barr Jr., founding director of The Museum of Modern Art, collected important works by Pablo Picasso, Joan Miró, Henri Matisse and Fernand Léger, among others. Much of the fine art from Nelson’s collection is now housed in celebrated institutions, such as The Museum of Modern Art in New York and The Museum of Fine Arts, Houston.

Exquisite jewelry from Happy Rockefeller’s personal collection will highlight our 4 December sale of Magnificent Jewels. The group on offer is led by a suite of designs by Van Cleef & Arpels, many of which were custom-made by “special order”.

Led by 14 pieces from the celebrated Meissen “Swan” service and important Chinese export ceramics, a remarkable array of the couple’s furniture and decorative arts objects will be offered in a dedicated sale during our Americana Week auctions in January 2019. Titled A Collecting Legacy, the sale comprises Silver & Vertu, Americana, Japanese Art, Books & Manuscripts, European and Chinese Works of Art and Prints, among other categories, showcasing Nelson and Happy’s worldly vision and eclectic spirit while providing an intimate glimpse into how the couple lived with these timeless objects.

FROM MOMA TO THE WHITE HOUSE: HOW NELSON ROCKEFELLER DEFINED THE ROLE OF THE ART PATRON–POLITICIAN FOR THE 20TH CENTURY

NELSON AND HAPPY ROCKEFELLER
Nelson Aldrich Rockefeller (1908-79) and Margaretta Large Fitler Murphy "Happy" Rockefeller (1926-2015) were widely known for their civic and philanthropic achievements. Throughout their lives together, they surrounded themselves with a collection that was in part inherited and in part deliberate, blended together in elegant refinement and exhibiting the consummate tastes of their time.

Nelson and Happy both had rarified upbringings. Nelson in particular grew up among beautiful objects from a multitude of cultures, and inherited from his mother, Abby Aldrich Rockefeller, a fervent appreciation of craftsmanship and connoisseurship. Instilled with this unwavering fascination with art in all forms, Nelson revered the creative spirit that artists brought to their work – a sentiment that he and Happy shared throughout their lives together, no matter the artist’s anonymity or prominence.

Nelson’s distinguished political career reached its pinnacle during his service as the 49th Governor of New York from 1959–73 and as the 41st Vice President of the United States under Gerald Ford. His experience in business included top positions at a number of his family’s companies, most notably as president and chairman of Rockefeller Inc. As president of the board of The Museum of Modern Art in New York, Nelson had access to the most forward thinking curatorial minds of the day, including founding visionary director, Alfred Barr Jr., who helped Nelson develop the confidence to collect and commission artworks unerringly for the rest of his life.

Happy received her nickname early in life due to her outgoing and easy temperament. From a prominent main-line Philadelphia family, her life was infused with a generous spirit of volunteerism; starting in the war years as a driver for the Women’s Volunteer Service, later on numerous campaign trails for Nelson, as an outspoken advocate for breast cancer awareness, as President of the Board of the Saratoga Performing Arts Center, and finally, as an official delegate to the United Nations.

While much of the couple’s collection was bequeathed to prestigious institutions and dispersed to various family members during Nelson’s lifetime, Happy continued to live with her favorite of the works. Taken together, this collection presents a lifestyle of spectacular refinement, emblematic of the Rockefeller style and taste of the 20th century.

PROPERTY FROM THE COLLECTION OF NELSON AND HAPPY ROCKEFELLER