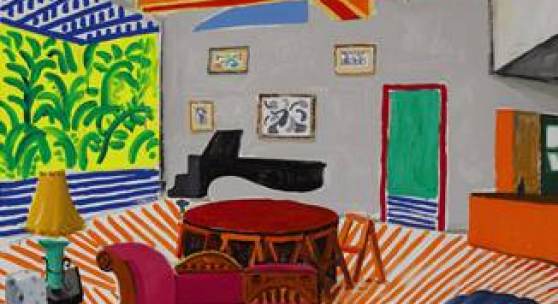 Estimated to Sell for $9/12 Million

NEW YORK, 12 October 2018 – Today Sotheby’s announces that David Hockney’s largescale painting Montcalm Interior with 2 Dogs from 1988, a highly regarded period within the artist’s career, will highlight our Contemporary Art Evening Auction in New York on 14 November 2018. The work comes to auction from the collection of legendary television producer and writer Steven Bochco, who acquired it in 1997, and appears at auction for the first time this fall with an estimate of $9/12 million.

Jacqueline Wachter, Sotheby's Vice President of Private Sales, Contemporary Art, said: “We are thrilled to present this dynamic Los Angeles interior to collectors on the West Coast next week and to bring it to auction for the first time in November. Los Angeles has played a major role in Hockney’s life and work, and this painting is an excellent illustration of that relationship. This piece is also one of the greatest Hockney’s to be kept in a private California collection, out of public view for the last 20 years. It is a particular privilege to offer this painting from the collection of the late Steven Bochco – himself a legend of the entertainment industry and of the city of Los Angeles."

Steven Bochco (1943 – 2018), a winner of ten Emmy Awards, was an iconic television writer and producer for over 50 years, best known for creating the groundbreaking television dramas “NYPD Blue,” “Hill Street Blues,” and “L.A. Law.” Bochco was an avid enthusiast of Hockney’s work and he hung Montcalm Interior With 2 Dogs prominently in the salon of his Los Angeles home, denoting it as his personal favorite from his collection of art.

Montcalm Interior with 2 Dogs will be exhibited publicly for the first time in over two decades in our Los Angeles galleries (2029 Century Park East, Suite 2950) on 16 & 17 October, alongside other highlights of our marquee autumn auctions in New York. In addition to the present painting, works by titans of the 20th and 21st centuries – including Jean-Michel Basquiat, Andy Warhol, Roy Lichtenstein, Barkley Hendricks, Claude Monet, René Magritte and more – will be on view to the public.

Lit with the bright glow of California sunshine, Montcalm Interior with 2 Dogs encapsulates Hockney’s evolution in the tradition of interior painting, while also displaying his unique interpretation of the genre. Painted in 1988 – the same year as his first, critically-acclaimed U.S. retrospective at the Los Angeles County Museum of Art – the canvas captures a room within Hockney’s Montcalm Avenue home in Los Angeles, which he purchased in the summer of 1979. This home went on to inspire a number of the artist’s most iconic paintings of the late-1980s, including the sister painting to the present work, Large Interior, Los Angeles, which has been held in the collection of The Metropolitan Museum of Art in New York since 1989. Montcalm Interior with 2 Dogs was featured prominently in the artist’s 1992-93 retrospective organized by Fundación Juan March, Madrid, which traveled to both the Palais des Beaux-Arts, Brussels and the Palau de la Virreina, Barcelona. The work has not been exhibited publicly since.

At once highly personalized and deeply rooted in art historical tradition, Montcalm Interior with 2 Dogs exemplifies Hockney’s ability to merge the painterly techniques of the past with his own distinctive, inventive, and remarkably intimate experience of reality. Painting with vivid brushstrokes and vibrant, raw colors that clearly evoke the post-Impressionist masters whom he greatly admired, Hockney flattens space to enhance the emotional and physical immediacy of the viewing experience. In this way, Montcalm Interior with 2 Dogs showcases the rich, saturated color application and deft handling of space that are characteristic of Hockney’s greatest paintings.