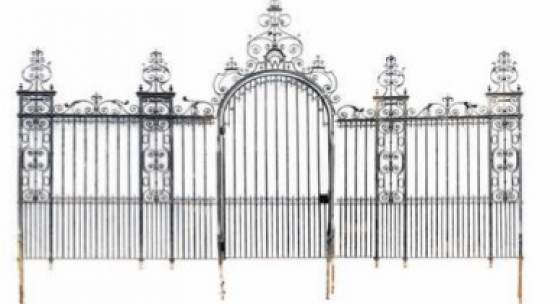 Summers Place Auctions' sale on Tuesday, 12th March saw ice age animals compete with historic cold war symbols with strong bidding in the auction room and on the phones. Highlight of the sealed bit part of the sale were the historic gates which used to be part of the 5th Earl of Warwick's wife's estate.

The sealed bid part of the auction was hugely successful with the famous Easton Lodge Gates and Entranceway selling for a total of £63,000 (£78,750), although each of the three lots selling to individual bidders in the UK with the Entranceway selling for £25,000. A life size bronze figure of a dray horse, which had been originally commissioned for Camden Market, sold for £25,000 (£31,250) against an estimate of £3,000 – 5,000.

In keeping with the Cold War theme, there was also an opportunity to bid for a rare Soviet Lavochkin V-751 experimental flying laboratory and an impressive 10.9 metres long, which sold for £8,500 (£10,625).

The top lot in the live sale was the David Wynne marble sculpture 'The Breath of Life', which had been commissioned in 1962, sold for £20,000 (£25,000) and a large mammoth tusk sold at over four times its low estimate for £12,500 (£15,625), while a woolly rhinoceros skull sold at three times its low estimate for £9,000 (£11,250) and a cave bear skeleton sold for £8,500 (£10,625). Rupert van der Werff, one of Summers Place Auctions' directors, says: “Given the current uncertainty, we were pleased with the outcome of the sale. We sold a high percentage and although many lots sold at low estimate, many lots did very well and sold for far more than its high estimate. We had many new buyers, both from the UK and abroad, in particularly the US.”


Highlight of the sealed bit part of the sale were the historic gates which used to be part of the 5th Earl of Warwick's wife's estate.
Summers Place Auctions