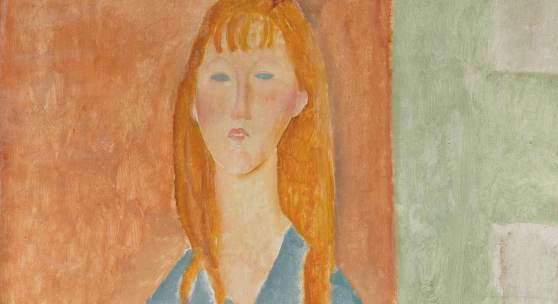 Including: One of the Finest Late Portraits by Amedeo Modigliani Left in Private Hands (Estimate $15/20 Million)

Peinture by Joan Miró Gifted to His Close Friend Alberto Giacometti, & Treasured in His Collection for Decades (Estimate $12/18 Million)

NEW YORK, 30 APRIL 2021 – Unveiled today, Amedeo Modigliani’s enchanting portrait of a young woman (estimate $15/20 million) and a richly symbolic abstraction by Joan Miró (estimate $12/18 million), which remained the personal collection of Alberto Giacometti for decades, will further highlight Sotheby’s Impressionist & Modern Art Evening Auction on 12 May in New York, in addition to newly announced works by Childe Hassam, František Kupka, Leonor Fini, Pablo Picasso, Egon Schiele, and many more. The outstanding group of works will be offered alongside many of the most well-known and beloved artists of Impressionist & Modern art, including: Claude Monet’s Le Bassin Aux Nymphéas (estimate in excess of $40 million), Paul Cézanne's Nature Morte: Pommes Et Poires (estimate $25/35 million), Pablo Picasso’s Femme Assise En Costume Vert (estimate $14/18 million), and Edgar Degas's Danseuse (estimate $10/15 million), among others. The full sale can now be viewed at Sothebys.com and will be on view by appointment at Sotheby’s York Avenue galleries from 1 – 12 May, before the auction begins at 8:30pm ET on 12 May.

AMEDEO MODIGLIANI’S JEUNE FILLE ASSISE, LES CHEVEUX DÉNOUÉS
Painted in 1919 following a move from Paris to the south of France a year prior, on the advice of his dealer Léopold Zborowski who feared for the artist’s health amid the increasing tension of the war, Jeune Fille Assise, Les Cheveux Dénoués (estimate $15/20 million) is one of the finest works from this productive period of Modigliani’s career. In the Côte d'Azur, Modigliani and his partner Jeanne Hébuterne were surrounded by an artistic community not unlike the one he associated with in Montparnasse, but far from Paris and the models that were afforded by Zborowski, Modigliani had to seek out new subjects on his limited stipend. Among the various portraits of Jeanne are a suite of depictions of the informal models Modigliani found in the local hotel workers, servants, and shop girls. This portrait captures the serenity of a youthful sitter and exemplifies the dynamic brushwork that defines the artist’s mature oeuvre. The mannerist, elongated features of the young woman’s face and figure, as well as her peaceful expression are a powerful synthesis of the recognizable traits that Modigliani developed in his post-1916 portraits: the simplification of the human form, the balance of soft lines and stark angles as well as the attenuated neck and vacant eyes. The portrait bears the hallmarks of Modigliani’s signature style, and Jeune Fille Assise, Les Cheveux Dénoués stands as one of the finest examples of the artist’s late portraits in private hands.

JOAN MIRÓ’S PEINTURE
Joan Miró’s Peinture (estimate $12/18 million) combines the artist’s love of signs and symbols with a thematic narrative that is at once passionate, lyrical and intensely creative. Populated by Miró’s archetypal motifs – celestial bodies, gaping mouths, stretching limbs – the work presents a mix of poetic lyricism, radical abstraction, and semiotic complexity that was ground-breaking among the avant-garde during this period and defined the artist’s work throughout his career. Dedicated to Alberto Giacometti and his wife Annette, the painting forms part of a group of pictures painted in 1954 that Miró gifted to his closest friends and supporters. Having resided in the personal collection of the Giacomettis for decades, until it was sold by the Giacometti Foundation at Sotheby’s in 2015, the painting is a powerful and exceptionally beautiful testament to the friendship between two of the greatest artists of the twentieth century. Miró’s Peinture works are among the artist’s most sought after, with two out of the top three prices at auction for the artist from this series, including Peinture (Femme Au Chapeau Rouge), which sold at Sotheby’s London in 2020 for $29 million.