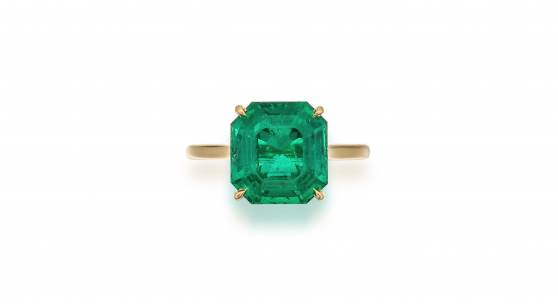 NEW YORK, 31 October 2022 – Salvaged from the depths of the ocean nearly 400 years after the fabled Nuestra Señora de Atocha shipwreck of 1622, a 6.25 carat emerald ring now resurfaces to the fore, making its auction debut at Sotheby’s. Considered a trophy from one of the most successful treasure hunts of all time, the emerald was found only 37 years ago, off the coast of Florida by a team of specialized treasure hunters, led by Mel Fisher. A triumph of human endeavor, this stunning emerald is one of the most important treasures recovered from the shipwrecked galleon. Offered from the collection of author and distinguished philanthropist, Mitzi Perdue, who was gifted the gem upon her engagement in 1988 by late husband Frank Perdue, this storybook emerald will be offered at Sotheby’s Magnificent Jewels auction on 7 December in New York, with full proceeds donated to support the humanitarian efforts in Ukraine.

The octagonal step-cut emerald ring, estimated at $50/70,000, joins an outstanding lineup of highly covetable jewels in Sotheby’s 7 December auction, including the 303.10 carat Golden Canary diamond – the largest flawless or internally flawless diamond ever graded by the GIA – both of which will be on public exhibition at Sotheby’s York Avenue Galleries starting 30 November as part of Sotheby’s Luxury Week sales series.

Alexander Eblen, Senior Specialist of Sotheby’s Jewelry Department in New York, commented: “While it has become tradition for Sotheby’s to feature the most desired, extraordinary jewels with historical and royal provenance, it is not every day that we offer long-lost hidden treasures discovered from the depths of the sea, concealed by tide and time for centuries. We are honored to be entrusted with this emblem of history from the collection of Mitzi Perdue to benefit such a wonderful and worthy cause.”

Mitzi Perdue, added: “I'm overjoyed to offer this extraordinary piece from my private collection. While I have cherished my beautiful engagement ring for over 30 years, I would like to use it now to benefit the great people of Ukraine. I am honored to partner with Sotheby's in offering this jewel for auction this year, on the 400th anniversary of the Atocha Shipwreck, and I know my late husband, Frank Perdue, would share my desire to help those in dire need.

The Atocha Shipwreck
The extraordinary treasures of the Nuestra Señora de Atocha reflect the unimaginable wealth and vast domain within the New World that Spain controlled in the early 17th century. The Atocha was commissioned by the Casa de Contractación, a Spanish government agency which attempted to regulate Spanish exploration and colonization efforts. The ship was constructed in Cuba and, after ill-fated attempts to depart the shipyard which necessitated repairs, finally crossed the Atlantic and arrived in Spain late in 1620. The Atocha sustained leaks in her bow and once they were repaired, joined the Tierra Firma fleet and departed Spain for the West Indies on March 23, 1622. In Cartagena, Colombia and Portobelo, Panama, the galleon was loaded with the belongings of the noble families and other passengers making the return journey to Spain with the armada. These armadas were under the constant threat of English and Dutch fleets as well as pirates. Spanish galleons, including the Atocha, were armed to defend themselves and the treasure that they carried, but only good timing and an element of luck would protect them against the fierce hurricanes that ravaged the Atlantic. The fleet set sail for Spain with goods and passengers on September 4, 1622 in the midst of hurricane season. Both the Atocha and the Santa Margarita only sailed as far as the Florida Keys before they hit a squall and sank along the reefs, left untouched for the next 363 years.

The Atocha may have been lost, but she wasn’t forgotten. For more than 350 years, treasure hunters dreamed of finding her. In the 1960s, long-time treasure hunter, Mel Fisher, a diver with an interest in salvaging shipwrecks, began exploring the waters off the coast of Florida searching for Spanish ships lost in the area. By the end of the decade he and his crew set their sights on recovering the Santa Margarita, with which they had quick success, and then decided to confront what was thought to be an impossible challenge: locating the elusive Atocha.

The Atocha wreck captured the world’s attention when news first broke of its discovery in 1985, in which Fisher's team uncovered the main hull of the Atocha and its hidden treasure that almost defies belief: some 180,000 coins and 24 tons of ingots struck from Bolivian silver as well as 125 bars of gold bullion extracted from the Caribbean, Mexico and the Andes amongst its many treasures. In addition to precious metals, the ship’s detailed log recorded an astonishing 70 pounds of rough-cut emeralds mined from Colombian sources in Chivor and Muzo which the Spanish had first learned of in the early 16th century. As Spain introduced these gems to a European and, in time, a global audience, their shocking depth of color, size, and clarity were unlike anything previously known from the long depleted Egyptian mines of antiquity.

As a patron of the Atocha discovery, Frank Perdue was awarded some of the treasures from the shipwreck, including silver and gold coins and gems. Although he later donated the majority of the coins and other artifacts to Delaware Tech and the Smithsonian Institution, as someone who was entranced with the romance of history, Frank held onto one exquisite jewel: an emerald, which he later had cut and mounted onto a ring to propose to his wife Mitzi in 1988.