Tsang Kin-Wah The Infinite Nothing I la Biennale di Venezia 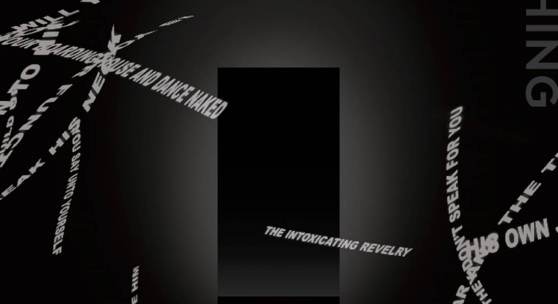 Conceived specifically for the exhibition, The Infinite Nothing consists of four stand-alone video installations that, altogether, form a narrative of transformative journeys through stages in life, exploring a perpetual cycle of self- inquiry and discovery. The work brings together a host of philosophical concepts expressed through metaphors and allegories, along with religious symbolisms and popular cultural references.

A devout Christian in his teenage years, Tsang Kin-Wah began to question religious values when he came under the influence of Friedrich Nietzsche’s existentialist philosophy. Developing from this perspective, Tsang’s oeuvre can be characterised as a constant search for meaning and purpose in life — with a full understanding of its potential futility. The conceptual underpinning of The Infinite Nothing, is suggested by the title’s reference to Nietzsche’s notorious pronouncement of the death of God: ‘Are we not straying as through an infinite nothing? Do we not feel the breath of empty space?’
The video installation will take the viewer on a journey, starting in the midst of a churning river and progressing through the different sections of the exhibition. In the final section, the visitor is led to a door which returns back to the beginning of the journey. The concept of a cycle of self-exploration is instigated: one in which old value systems are replaced by new ones, questioning the possibility of an actualisation of eternal recurrence.

Dr. Wilfred Wong, Chairman of the ADC, said, “For more than a decade, our participation in the Biennale has continued to reinforce Hong Kong’s long-standing mission in art. The ADC and M+ share interest in showcasing the vitality of Hong Kong art to overseas audience and strengthening Hong Kong’s position as a cultural centre in Asia. Building on our past achievement, this year’s renewed partnership will continue the effort to encourage dialogues with art professionals and practitioners around the globe.”

Doryun Chong, Curator, commented, “Tsang is exceptional at illustrating the ever-shifting nature of life. Featuring his signature text projections as well as use of found moving images this video installation will seek to question the imposed archaic values and the moral force of religion, while affirming the human quest for self-betterment via a lifetime’s search for truth and reality. Echoing views on truth and interpretation, while combing the idea of the illusionary ideal world, this work is set to be a powerful and engrossing addition to the Biennale both perceptually and conceptually.”

Tsang Kin-Wah added, “This new series of work for the Venice Biennale echoes Nietzsche’s views on truth and interpretation and also alludes to the fragility of the absolute, the instability of things, and the uncertainty of life. I am also interested in how these ideas connect with the Hindu/Buddhist notions of karma and reincarnation. I am delighted to be developing new works with the support of M+ and the ADC.”

The Infinite Nothing: I , 2015, Single-channel video and sound installation, Dimension variable, Image courtesy of the artist