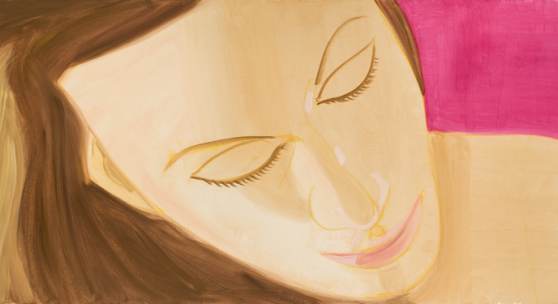 Galerie Thaddaeus Ropac is pleased to announce an exhibition of new paintings and works on paper by Alex Katz, all pertaining to the medium of dance. Since 1960, the American painter has continually drawn inspiration from dance, influenced by his longstanding collaboration with modern dancer and choreographer Paul Taylor (1930-2018). While working on sets and costumes for Taylor’s performances, Katz developed an original body of work, using dancers as models to explore the immediacy of gesture and movement through the medium of painting.

In this new series of dancers’ portraits, Katz magnifies movement through the radical cropping that characterises his unique style, focusing on isolated parts of the body shown in arrested motion. This original format, which crops single body parts frozen in movement, is inspired by the imagery of television and Hollywood cinema, a technique used by the artist to convey the most arresting effect. Katz was inspired by the imagery of television and Hollywood films, as friend and poet Frank O’Hara (1926-1966) describes: ‘For Katz the image, and his TV, billboard or movie close-up discovery, provided a way of both isolating and abstracting each separate feature, as if it were an arc, a rhomboid, an ellipse, within the psychological unity which the audience imparts to a recognisable form.’ The repeated use of the colour red endows these new paintings with a marked intensity, highlighting in contrast the luminosity and dynamism of the dancer’s figure, executed with swift brushstrokes across a monochromatic background.

Speaking about the series, Katz emphasised the importance of dance and motion to his work:  ‘The gestures interest me, which go right to the heart of dance. Paul [Taylor] was a student of art history, which is translated in his early pieces. There is a long tradition of gesture, and then you go into motion; in general a camera captures something but it doesn’t have a real sense of motion. You can only convey real motion when you manipulate it, such as the way Rubens brings motion in his figures. So that became one of the things I was interested in.’

Since the early 1950s, Katz has developed a unique ‘modern realist’ style that is delicately poised between abstraction and Pop Art figuration. The apparent simplicity and overall flatness of his painterly style anticipated Pop Art in many ways, a label that Katz has often rejected, characterising himself first and foremost as a painter of the ‘now’, beyond any recognisable movement: ‘Pop Art deals with signs, while my work deals with symbols. Pop Art is cynical and ironic. My work is not. Those are big differences. Pop Art is modern. My work is traditional.’ A painter who has always eluded easy categorisation, Katz has sought to encapsulate, with his fast-moving, unmistakable style, a fleeting impression of what he terms the ‘immediate present.’

The use of a red background is reminiscent of one of Katz’s early paintings, the famous The Red Smile (1963, Whitney Museum of American Art, New York), which is a portrait of Ada, his wife and muse. The alluring effect of this picture is underlined by the visual appeal of Ada’s red lipstick, isolated on a monochrome surface that pays homage to the abstract painter Barnett Newman – in particular, to his expansive use of red in Vir Heroicus Sublimis (1950-51) held in the collection of The Museum of Modern Art, New York. In this work, Katz recalls that he first tried painting the background grey, which he later replaced with an all-over magenta red, choosing this colour for its greater formal potency in clearly outlining Ada’s profile.

More than 50 years later, Katz has used a similar painterly effect in his new series, using the colour red to produce a sense of movement, which the artist describes as the ‘immediate sensation you see before you focus.’ The scale of these works, coupled with the cropping of the image and its smooth painted surface, conveys a heightened experience of the dancer’s presence: ‘When you actually see a dance, the figure is an inch and a half high from where you are in the audience. And if the dancer is very good, the performance becomes life size. It is no longer an inch and a half, it becomes an immersive experience. It’s all in your mind what life size is. So the key thing is the motion. With the cropping, you can convey more of the feeling of a performance than in a picture of people who are one inch high.’

An artist who has long engaged with the tradition of modern painting, Katz often expresses admiration for the works of Henri Matisse, their sense of colour, composition and economy of means. When looking at this new body of work, one is reminded particularly of Matisse’s Dance series, where a radical sense of movement and distortion is expressed, as well as his famous cut-outs, a formal apparatus that Katz would return to time and again by inventing new ways of dealing with portraiture.

Exhibited in the first floor gallery, a selection of Katz’s works on paper reveals both the initial inspiration and the process by which the artist figures out how to translate a raw image into a final work. In general, Katz begins with a quickly executed pen or pencil drawing and sometimes an oil sketch that defines the motif. He then builds upon the initial idea with successively refined drawings and large-format cartoons that he affixes to a primed canvas and punctures with a tool (a Renaissance technique called pouncing, invented for frescoes) to map the basic outline of the motif on the surface. Swiftly made, the sketches exhibited here are marvellously evocative and stand as tokens of the artist’s exploration of perspective, scale and focus, as well as the issue of colour.


‘The gestures interest me, which go right to the heart of dance.’ — Alex Katz
Galerie Thaddaeus Ropac