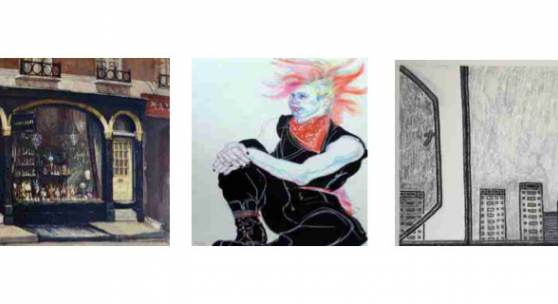 Connect – The Independent Art Fair will have a special London focus with works by artists trained at the best London art schools and embracing London in their art – from famous landmarks to everyday life. 'London Calling' is celebrating the diversity of the city and its artists.

This is the second time the fair, organised by a dealer co-operative, will open its doors at Mall Galleries to collectors and art lovers on Thursday, 30th January 2020. This year, it will be open all weekend closing at 4pm on Sunday, 2nd February and entry is £10 or sign up for free tickets online. A special preview will be held on Wednesday, 29th January by invitation only and a limited amount of tickets will be available for £25 each. Visitors can expect an excellent mix of dealers providing something for everyone's taste with prices averaging from £500 to £20,000, but with plenty of works from as little as £100 and with the top price tag at £200,000.

'London Calling'
London is famous for its art scene – there is a public gallery and an art school in almost every district of London with many smaller galleries and art dealers alongside. Mall Galleries is in the heart land with the National Gallery, Portrait Gallery and Royal Academy just a short walk away as well as the leading auction houses and some of the oldest art dealers. Artists have been drawn to record London's architecture, views of the Thames, the palaces, backstreets and parks – Canaletto’s views of London are as prized as those of Venice, Monet's fogbound Westminster more magical than Paris. You will see evidence of artists trained by the best of London's art schools and famous artists paying homage to London throughout the Fair.

Highlights include:
 Sarah Colegrave Fine Art will bring a separate exhibition 'Paintings of London by Rex Vicat Cole and John Cole'. Rex Vicat Cole was the third of four generations of London painters. An influential and well-respected teacher associated with the school that bore his name, the Byam Shaw and Vicat Cole School of Art in Kensington. He earned his reputation as a painter of landscapes much in the tradition of his famous painter father and grandfather, but was at heart a Londoner and by the mid 1920s he would increasingly record the history and architecture of his home city. Many of these views would soon be lost forever, victims of the Blitz in the 1940s and the extensive re-development of the Post-War city. Vicat Coles’s works show the strong imprint of their time through the cars, people, cafes and shop fronts; and of a city slowly emerging from the dark shadow of the Depression.

Although Rex Vicat Cole’s son John superficially appeared to continue closely in his father’s footsteps, he asserted an early independence and he exhibited some 100 works at the Royal Academy (nearly every year from the mid 1930s until his death in 1975). Cole’s signature subject was the London shop front in bold straightforward compositions that have often been described as “portraits of shops”, Cole would become so strongly associated with this subject that the critic of the Sphere described Cole in 1949 as the “artist to a nation of shopkeepers.”

Fifties Art brings some exceptional works by artists, who worked in post-war London, including by Richard Platt (1928-2013). His lithograph ‘Caribbeans Playing Pinball’ was completed only 2 years after the arrival of the Empire Windrush in 1950 and shows the impact the post-war migrants from the Caribbean must have had on a drab London scene.

 Gwen Hughes Fine Art will be bringing a collection of Dick Lee paintings – 6 in total, all of the Thames / West London. Dick Lee lived in Barnes in the 1960s and he very much painted in and around that area.

 Blondes Fine Art will be showing a wide range of artists and works include the original signed artwork by Royal fashion designer Ian Thomas for the design of the blue chiffon outfit HM Queen wore for Charles and Diana's wedding. On the other end of the spectrum is the studio collection of Jo Brocklehurst, considered to be the 'Hogarth' of contemporary London night life. She is best known for her portrayals of the London Punk community during the 1980s. Her studies of these flamboyant characters include Billy Idol and Souxie Sioux. She captured the spiky defiant ‘edge' of these rebellious youngsters with fluid inky drawings and watercolours like a current day Egon Schiele.

 Amanda Aldous Fine Art is bringing abstract works by Jean Noble RI, which is based on around the Docklands and the Thames. Jean takes her inspiration from the vibrant and burgeoning city extending out to 'Docklands'. She loves the buzz, the cranes, the wonderful emerging buildings encroaching along the Thames.

 The Art Stable will have a wide range of London works on the stand, and contemporary artists William Wright does pastel drawings of the view from his window in SE London. His works are often described as minimal, but the fact that details have been taken out make them quiet and distilled observations of his immediate environment.

Other Fair highlights:
 Mark Goodman will be bringing some important Bridget Riley works on paper. She is of course hugely fashionable at the moment with the Hayward show which ends just before the Fair opens. Mark will stage a mini Riley show with much more affordable prints with prices ranging from £8,000 to £200,000, possibly the highest value work at the Fair.