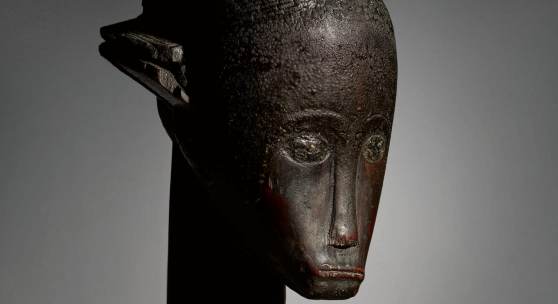 *Estimate $2.5/4 Million*
NEW YORK, 27 May 2020 – Sotheby’s is thrilled to announce that we will offer The Clyman Fang Head – one of the most important works of African Art ever to appear at auction – in our Contemporary Art Evening Auction to be held in New York the week of 29 June. On offer from the The Collection of Sidney and Bernice Clyman with an estimate of $2.5/4 million, the reliquary statue will be the first work of classical African Art to be presented in any contemporary art evening sale.

During our marquee sale week this June, Sotheby’s will also present African Art from the Collection of Sidney and Bernice Clyman in a dedicated auction and a selection of fine art from the collection will be offered across our Contemporary, Impressionist & Modern and American art sales.

Clients and visitors can expect extra precautions to ensure the safety of our employees and visitors, as well as creative opportunities for those wishing to preview our exhibitions and participate in our auctions – from in-person and virtual appointment viewings to enhanced digital experiences. We will announce a more a detailed schedule in due course, including relevant exhibition plans.

Alexander Grogan, Vice President and Head of Sotheby’s African & Oceanic Art Department in New York commented: “The Clyman Fang Head is a legendary and iconic work of art, and we are privileged to showcase a work of its quality and provenance on one the biggest stages in the art world at Sotheby’s Contemporary Art Evening Sale. It is unprecedented to present a work of classical African Art in a contemporary art auction, and our decision to do so celebrates the Clyman’s visionary taste and foresight in pairing African Art with modernist and abstract 20th century art, and highlights the natural aesthetic affinities between these works. The Clyman Fang stands out as an indisputable masterpiece of the Clyman’s collection, and we are excited to share it in a new setting this June.”

David Galperin, Head of Sotheby’s Evening Auction of Contemporary Art in New York said: “We are excited to present the exquisite Clyman Fang Head to a new audience of collectors for the first time in our Contemporary Art Evening auction. Beyond its renown as a legendary icon of classical African Art, what struck me about this singular sculpture when I first saw it in the Clyman home alongside their collection of Post-war art was how its form appeared so radical and purely modern. It is a privilege to position the Fang Head in dialogue with groundbreaking 20th Century artists who were deeply influenced by African art such as Pablo Picasso, Amedeo Modigliani, and Jean-Michel Basquiat. As one of the finest examples of its kind, the Clyman Fang Head transcends categories. Offering this work in our Contemporary Art Evening Auction is a testament to the sculpture’s enduring aesthetic relevancy and represents a shift not only in how we showcase masterworks at Sotheby’s, but how collectors look across traditional boundaries to seek the very best of modern visual expression.”

“African art is not realism and not completely abstract. Rather, it combines both in a new form of art that inspired and excited the modern masters in the beginning of the [20th] century and which was incorporated in their masterpieces. When African sculpture and the work of expressionism, cubism and abstraction are placed side by side, they "work" together and "belong". This is what we find so exciting. The unique imagination of these self-trained craftsmen in their work for mystical, religious and other purposes was a far cry from the conventional art we all knew. Even though years have passed, the thrill of seeing and holding these wooden sculptures has not passed.” *
- Sidney & Bernice Clyman

The Clymans began their long collecting adventure as clients of the renowned dealer Gaston De Havenon in the early 1970s when the market for collecting African Art emerged in America. In over half a century of collecting, the couple assembled a small but superb group of masterpiece-caliber examples of the major sculptural styles of sub-Saharan Africa. Through the influence of visionary gallerist Allan Stone and the pioneering African-American dealer, Jazz musician and painter Merton D. Simpson, the Clymans also began collecting abstract 20th century art. These dealers and the artists they represented opened an exciting universal world of artworks, and this concept found a fertile and harmonious place in the Clymans’ Scarsdale home in a dialogue between African art and 20th century artists such as Wayne Thiebaud, Willem De Kooning, Arshile Gorky, Jean Dubuffet, Franz Kline and Nicolas de Staël.