Janet Cardiff & George Bures Miller I The Murder of Crows 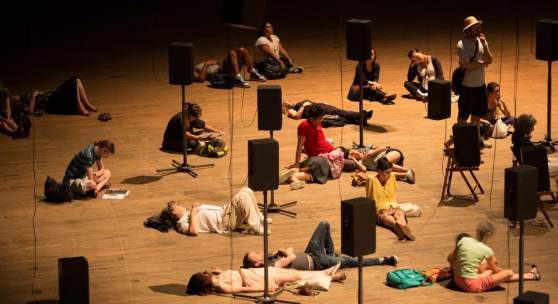 The Murder of Crows is a large 30-minute immersive sound installation by Janet Cardiff & George Bures Miller, which was commissioned by TBA21 in 2008 for the 16th Biennale of Sydney, and is here presented in collaboration with Matadero Madrid in celebration of TBA21’s twentieth anniversary.

Berlin-based, Canadian-born life and artists duo Cardiff & Miller are known for their immersive multimedia sound installations and their audio and video walks. The Murder of Crows is part of their investigations into sculptural and physical sound inspired in part by Francisco Goya's etching The Sleep of Reason Brings False Monsters, where a man is asleep on his arms and is surrounded by flying owls and bats, and in part by a grouping of crows (called murder) known to occasionally flock around one of their deads in cawing “funeral” ceremony that can last for over 24 hours. The installation consists of ninety-eight audio speakers mounted on stands, chairs, and the walls, as a minimalist flocking of speakers surrounding a small desk with a megaphone lying on its side—echoing the sleeping man in Goya’s etching and the owls and bats flying over him. Taking over the exhibition space, the speakers broadcast a morphing electronic dreamscape composition of natural and industrial sound effects, Cardiff’s voice telling a sequence of dreams, and music—from string composition to choir to marching band. The sound's juxtapositions, created by special stereophonic recordings and replay techniques, mirror the helplessness of nightmares, interweaving narrative of conflicts, violence, and loss in a world in crisis, but is also a dreamy haunted call for hope.