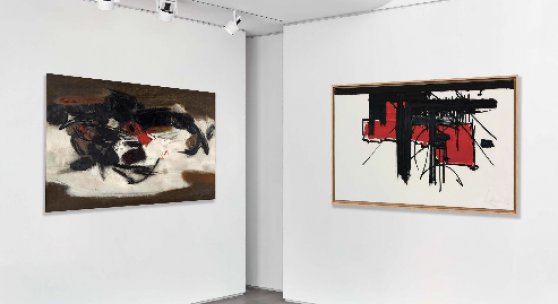 Opera Gallery is pleased to present a fascinating exhibition that links two of the biggest names in abstract art: French-Chinese artist Chu Teh-Chun (1920-2014) and French artist Georges Mathieu (1921-2012). By bringing together these artists, the show intends to create a dialogue between two masters of European Lyrical Abstraction who were born one year and nine thousand kilometers apart but crossed paths throughout their artistic journeys in terms of style and inspiration.

United in their search for an expressive form of abstraction, released from the norms established by Geometric Abstraction, Chu and Mathieu preferred to let themselves be guided by memory, emotion, and immediacy. In their search for a new pictorial language, both artists were influenced by sign and calligraphy. Abstract art progressed significantly in Europe and the United States after the Second World War.

Poetic and sophisticated, Opera Gallery New York welcomes you to Chu Teh-Chun and Georges Mathieu in New York, Compositions in Rhythm, and invites you to explore this symphonic dialogue between both artists– one about spirituality and musicality.