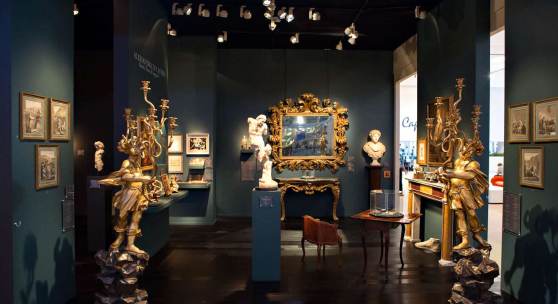 Masterpiece London is delighted to announce its official Cultural Partners ahead of the 2015 Fair, including the National Portrait Gallery, the Wallace Collection, the Sir John Soane's Museum and The Courtauld Institute of Art. These institutions represent the world’s most celebrated artists, display historically and culturally important works and house some of the most prized private collections known internationally. The diverse appeal of their collections makes them natural partners for Masterpiece London.

The support of these renowned UK institutions confirms Masterpiece London’s position as an integral part of the capital’s cultural offering. The summer season in London is an important period in the annual arts calendar, when the national museums open blockbuster exhibitions, the auction houses hold their major annual and bi-annual sales in London, and art galleries across the West End host exhibitions for London Art Week and Master Paintings Week (3 – 10 July).
Coinciding with Masterpiece London, The Courtauld Gallery will present their summer showcase exhibition ‘Unfinished…Works From The Courtauld Gallery’ (18 June – 20 September 2015), bringing together paintings, drawings, prints and sculpture from the Renaissance to the early twentieth century that have all been described as unfinished. In the autumn the gallery will celebrate one of Britain’s most important and original Post-War artists, Peter Lanyon (15 October 2015 – 17 January 2016), with an exhibition entitled ‘Soaring Flight: Peter Lanyon’s Gliding Paintings’.

The National Portrait Gallery will be opening their summer exhibition Audrey Hepburn: Portraits of an Icon (2 July – 18 October 2015), illustrating the life of the actress and fashion icon, followed by their autumn exhibition Giacometti: Pure Presence (15 October 2015 – 10 January 2016), which will focus on his portraits that span his entire oeuvre. Sir John Soane’s Museum celebrates the re-opening of Sir John Soane’s Private Apartments and Model Room (opened on 19 May), which have not been seen for 160 years. These will remain open until 4 July 2015 and the tours will be led by the expert staff at the museum. The Wallace Collection is running an exhibition that provides a fresh perspective on the towering figure of British painting; SirJoshua Reynolds. Spanning most of Reynolds’s career, this exhibition demonstrates the sheer diversity of his artistic production and provides an eloquent and surprising insight into the creative processes of this remarkable British artist. Joshua Reynolds Experiments in Paint is open until 7 June. Beyond this, to celebrate the Wallace Collection’s partnership with Masterpiece London new members of the Wallace Friends Scheme will receive General Admission tickets to the fair over the coming weeks.

Each of these Cultural Partnerships reflect the cross-collecting nature of the Fair, highlights the importance of summer in London for the arts sector, and emphasises the unique position Masterpiece occupies in the international art market. Further cementing this, is the tremendous support the Fair receives from museums around the world.
Each year Masterpiece London draws curators to the Fair from the world’s finest cultural institutions and has established itself as an important annual meeting place. The success of the Fair can, in part, be attributed to the groundswell of interest and purchases from these world-renowned institutions including the Museum of Fine Arts Boston, Rijksmuseum, MoMA, British Museum, Victoria & Albert Museum, The Getty and Tate.
In addition Masterpiece London will be working with London & Partners and VisitBritain to promote the summer arts season in London, and across Great Britain, in which there are two weeks were Masterpiece takes place. CEO of London & Partners, Gordon Innes, says: ‘The capital offers a vibrant and diverse variety of arts and culture all year round providing a great reason to put London at the top of your list of places to visit. London’s world-class cultural institutions and events have long helped drive a significant increase in the visitors to London. This summer’s outstanding programme of exhibitions and events - including Masterpiece - will further boost London’s visitor economy as the capital cultural offer continues to go from strength to strength.’

“Great Britain's cultural scene is world-renowned for being the birthplace of Turner, Shakespeare, Mackintosh, Gormley, Hirst, Hockney and Dylan Thomas, as well as perennial favourite events including The Proms, Glyndebourne, Wimbledon, Royal Ascot and the Edinburgh Festival. Summer is a fantastic time for visitors to experience all that Britain has to offer, especially culture, and the Masterpiece Fair is a fabulous way to enjoy fine arts, antiques and design from around the world, in a unique setting,” said Joss Croft, Marketing Director for VisitBritain.
CEO of Masterpiece London, Nazy Vassegh says ‘Museums and cultural institutions have been central to Masterpiece fair from the very beginning and this year we are thrilled to partner with these leading international institutions. The fair provides an excellent platform for collectors, art dealers, cultural institutions and connoisseurs to congregate during this important season in London, which we have consciously chosen to be part of.’ To find out more about Masterpiece London and the Cultural Partners, visit masterpiecefair.com