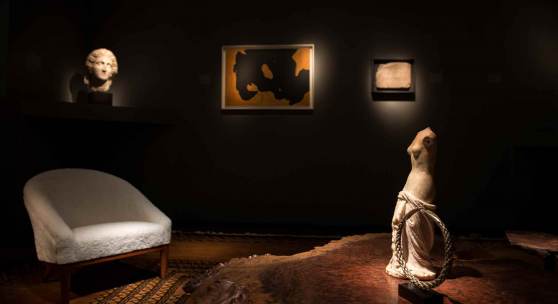 Masterpiece London has established itself as the world's leading cross-collecting fair, offering the finest works of art, design, furniture and jewellery, from antiquity to the present day. This unmissable event at the height of the capital's summer season provides an unparalleled opportunity for new and established collectors to discover exceptional works for sale from 160 international exhibitors. This year’s edition showcases rare and important Impressionist and Modernist paintings; compelling presentations celebrating British art and design; exquisite jewellery; art and objects from antiquity as well as contemporary work by artists including Marina Abramović, Ibrahim El Salahi, Chiharu Shiota and Rob & Nick Carter. The Royal Bank of Canada returns as the Fair’s principal sponsor for the fifth successive year.

Masterpiece Presents
MASTERPIECE PRESENTS, in collaboration with FactumArte and Lisson Gallery, will showcase new works by Marina Abramović, Five Stages of Maya Dance, in an immersive, specially conceived area. This unseen body of work comprises five alabaster portraits of Marina Abramović which merge performance, light and sculpture. Their hauntingly physical presence decomposes into intricately carved landscapes of alabaster as you move around the pieces.

Cross-Collecting
Masterpiece’s cross-collecting ethos can be seen throughout the Fair, where exhibitors specialising in a wide variety of disciplines and eras are brought together, offering the broadest spectrum of works of any art fair, with classical and contemporary shown side-by-side. Visitors will encounter presentations which carefully combine furniture, sculpture and works of art from all periods, unified by quality. Examples of this ethos can be seen at Benjamin Proust, Perrin Fine Art, Robilant + Voena, and Safani Gallery & Geoffrey Diner.

Reflecting this breadth, new exhibitor ArtAncient’s presentation will feature a rare ‘shooting star’ meteorite, formed 4.6 billion years ago, whilst specially commissioned contemporary artwork will be presented at Blain|Southern with an installation by Japanese artist Chiharu Shiota.

Les Enluminures and Daniel Crouch will stage a carefully curated presentation entitled ‘A Brief History of Time: From Matins to Mars’. The booth will display celestial maps, instruments, illuminated manuscripts and medieval and Renaissance jewellery, inviting viewers to contemplate the perception of time across history. Hauser & Wirth’s ‘Wunderkammer’, or cabinet of curiosities, will also combine disciplines with contemporary and modern works by Louise Bourgeois, Phyllida Barlow, Subodh Gupta and Philip Guston, presented alongside 18th and 19th century furniture.

Impressionist and Modernist Presence at the Fair
This year, highly important Impressionist and Modern works will be exhibited at the Fair by a number of exhibitors. Landau Fine Art’s presentation will include a Picasso oil painting which hung for decades behind the desk of his only dealer, Paul Rosenberg. Gladwell & Patterson will be bringing a preeminent example of a late waterlilies painting by Monet and, celebrating its 90th anniversary this year, Hammer Galleries will be bringing an early work by Joan Miró along with Marc Chagall’s Peintre au coq rouge.

The Best of British
Masterpiece is an important destination for collectors of British art and design and many of this year’s exhibitors are celebrating the work of British artists as well as those who have lived and worked in the UK. This focus is encapsulated by Richard Green whose presentation ‘Best of British from our Shores and Beyond’ includes pieces by J.M.W.Turner, L.S. Lowry and John Constable.

In celebration of the 300 year anniversary of Thomas Chippendale’s birth, Ronald Phillips and Apter-Fredericks will be presenting important pieces by the British cabinetmaker. British furniture will also be championed by Oscar Graf, whose stand will explore the theme of ‘Victorians & Edwardians’, displaying beautiful pieces in a variety of styles from 1860-1910. Jewellery exhibitor Didier Ltd. will include a focus on British designers on their booth with pieces by Wendy Ramshaw and her husband David Watkins.