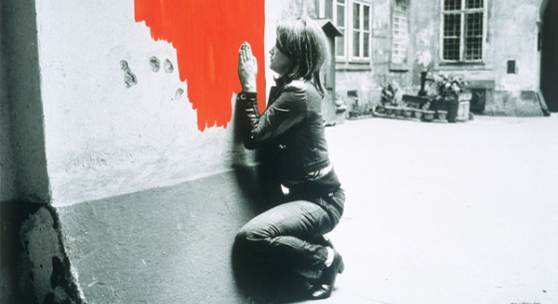 Galerie Thaddaeus Ropac is pleased to announce its representation of VALIE EXPORT.

VALIE EXPORT was born in Linz, Austria, in 1940. After attending the Arts and Crafts College in Linz (1956-59), she enrolled at the Design Department of the Higher Federal Teaching and Research Institute of the Textile Industry in Vienna, where she studied from 1960 to 1964. In 1967, she decided on the name VALIE EXPORT as an artistic concept and logo. In 1967 she co-founded the Austrian Filmmakers’ Cooperative in Vienna, and took part in many important international exhibitions, including documenta 6 and 12 (1977 and 2007) and the Biennale di Venezia 1978, and 1980 for the Austrian Pavilion. VALIE EXPORT has taught at numerous international institutions, including the University of Wisconsin, Milwaukee (USA), The San Francisco Art Institute and the University of the Arts in Berlin. From 1995/96 until 2005 she was professor for Multimedia-Performance at the Media Art Academy in Cologne. In 2000 the artist was awarded the Oskar Kokoschka Prize and in 2014 she received the Yoko Ono Lennon Courage Award for the Arts. VALIE EXPORT lives in Vienna.

In the Expanded Cinema works, EXPORT developed her performative approach in a radical, actionist way. Being herself the protagonist, she experimented radically with the limits of cinema. In her cinematic actions she broke away from the usual passive reception characteristic of the medium. Ping Pong (1968) was awarded a prize as the most political film shown at the second Maraisiade in Vienna. At the award presentation, EXPORT performed, for the first time, her legendary body action TAP and TOUCH CINEMA (1968), in which she raised the issue of how the female body is being turned into an object in the media. EXPORT is a self-declared media artist and is a pioneer in this regard, both in her cinematic and video work. In a series entitled Body Configurations [Körperkonfigurationen] (1972-82), she approached the issue of the relationship between a constructed body language and the surrounding urban space. She has continued her taboo-breaking, socially critical work since the late 1980s, in her involvement with digital technologies.

The University of Linz, in cooperation with LENTOS Kunstmuseum Linz, will establish the VALIE EXPORT Center, a research center for media and performance art, which will open on 10 November 2017.