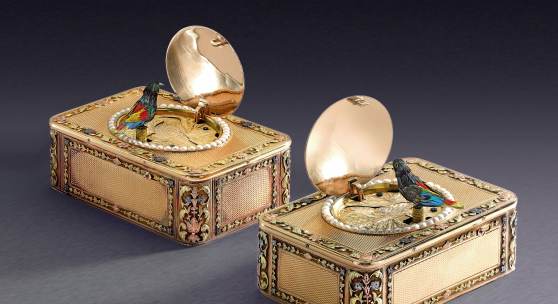 NEW YORK, 25 May 2018 – Yesterday’s auction of Important Watches at Sotheby’s New York achieved $9.1 million, the highest total since 2016. Highlighting the diversity of timepieces available at auction – from singing bird boxes and marine chronometers to vintage wristwatches and modern sport watches – the sale featured 15 lots over $100,000.

Daryn Schnipper, Chairman of Sotheby’s International Watch Division, and Sam Hines, Worldwide Head of Sotheby’s Watches, commented: “Yesterday’s auction in New York followed in the footsteps of successful sales in Hong Kong, London and Geneva, bringing the total for Sotheby’s Watches spring season to $37.1 million. We look forward to continuing this momentum – driven by strong interest from clients around the world for vintage and modern wristwatches as well as unique timepieces from the 19th, 20th and 21st centuries – into our online-only auctions of timepieces this summer as well our fall auctions, kicking off in Hong Kong in October.”

Katharine Thomas, Head of Sotheby’s Watches & Clocks Department in New York, and Nate Borgelt, Head of Sale for Sotheby’s Watches in New York, added: “From modern marvels by Audemars Piguet and vintage wristwatches by Rolex, to bird boxes by Frères Rochat and marine chronometers by Breguet, yesterday’s sale of Important Watches represented the full spectrum of horology. We were delighted to see enthusiasm for these multiple disciplines throughout our sale of over 5 hours –including a record for a Mark 3 Double Red Sea Dweller – which totaled $9.1 million, the highest result in two years.”

AUCTION HIGHLIGHTS
The sale was led by an Impressive and Rare Consecutively Numbered Pair of Four-Color Gold and Pearl Singing Bird Snuff Boxes by Frères Rochat, which reached a final price of $519,000 (estimate $300/500,000). Separated for decades before being reunited by the owner, these automatons are believed to be the only known reunited pair of consecutively numbered bird boxes by the horological house to be offered at auction; one of the two boxes was formerly in the collection of Henry Ford II.

A pair of extraordinary wristwatches by independent watchmakers highlighted the modern offerings. Audemars Piguet’s Massive Limited Edition Platinum Tourbillon Chronograph Wristwatch with Double Power Reserve Indication and Bracelet made its auction debut and attracted significant competition in our New York headquarters. Expected to fetch $100/150,000, this Royal Oak Offshore from circa 2004 – a cornerstone of the company’s Tradition d’Excellence Collection – sold for a final price of $423,000. Later in the sale, Richard Mille’s magnum opus, an Impressive Platinum Tonneau Form Tourbillon Split Seconds Chronograph Wristwatch, achieved $423,000. Inspired by Formula 1 racing and composed of over 500 parts, the RM008 with power reserve and torque indication is one of the most complicated objects ever made.

Offerings by Patek Philippe were highlighted by a Fine and Very Rare White Gold Cushion-Form Perpetual Calendar Chronograph Wristwatch, which sold for $250,000 (estimate $200/300,000). This particular Ref 5020G-013 – carrying the nickname of the Patek TV set watch – is believed to be one of only 8 examples of Ref. 5020 in white gold known to the market.

Finally, yesterday’s auction featured a Rare and Early Eight Day Octagonal Boxed Marine Chronometer with Twin Barrels No. 106 by Breguet et Fils. One of the earliest marine chronometers by the firm, the present lot also carries the distinction of being Breguet’s earliest-known recorded sale of a marine chronometer, which took place in 1816. Carrying a pre-sale estimate of $30/50,000, two collectors battled for the timepiece, bringing the final price to $81,250.

WATCHES ONLINE
Sotheby’s is pleased to continue our auctions of clocks & watches this summer with Watches Online, open for bidding 18 through 25 June. The sale will feature a diverse range of property, including modern and vintage wristwatches from a variety of brands.