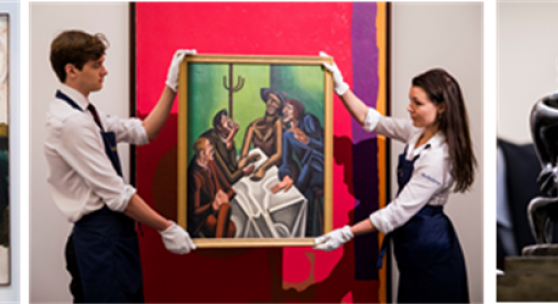 Simon Hucker, Senior Specialist, Modern & Post-War British Art, said: “This week’s sales saw healthy demand for fresh-to-the-market works by the 20th century’s most pioneering and best-loved artists. Reflecting the pivotal role that these artists played in the international art scene, bidders hailed from 24 countries across five continents and 14% of the lots were sold to online buyers.”

Sotheby’s Autumn sales of Modern and Post-War British Art on 20 – 21 November brought a total of £11,114,375 / $14,259,743, with a robust sell-through rate of 80% overall and 93% in the Evening Sale, and half of the lots exceeding their high-estimates. The auction was led by Henry Moore’s maquette for the seminal Family Group, a perfect expression of the sculptor’s lifelong obsession with the universal motif of parenthood. Appearing at auction for the first time, having previously been in the collections of The Museum of Modern Art in New York and art dealer Jeffrey Loria, it now emerged from an important Japanese private collection to sell for £1,450,000 / $1,860,350.

A further highlight of the Evening Sale was William Roberts’ highly sought-after The Joke, a vivid depiction of the heady Bohemian London nightlife in the 1920s, which achieved a double-estimate £994,000 / $1,275,302 – the second highest price for the artist at auction. It was appearing at on the market for the first time, having been acquired by the grandfather of the previous owner from Roberts’ very first solo exhibition in 1923.

Eight lots from the collection of the Ben Uri Gallery & Museum together sold for £1,360,000 / $1,744,880. Proceeds from these sales will fund further acquisitions, the Ben Uri Research Unit – dedicated to the study of the immigrant contribution to British visual arts since 1900 – and the expansion of the Ben Uri Arts and Dementia Institute. Highlights from the selection included David Bomberg’s At the Window, which brought £670,000 / $859,610, Bomberg’s English Woman, which sold for £370,000 / $473,267, and Mark Gertler’s Nude, which made £81,250 / $105,999. Ten further works will be offered as part of Sotheby’s Victorian, Pre-Raphaelite & British Impressionist Art on 13 December.

The Evening Sale also saw a new auction record achieved for Gillian Ayres, one of Britain’s most significant abstract painters, who passed away earlier this year at the age of 88. Nimbus, one of the finest examples of her work from the early 1960s and originally gifted to fellow artist Anthea Alley, sold for £75,000 / $95,933.