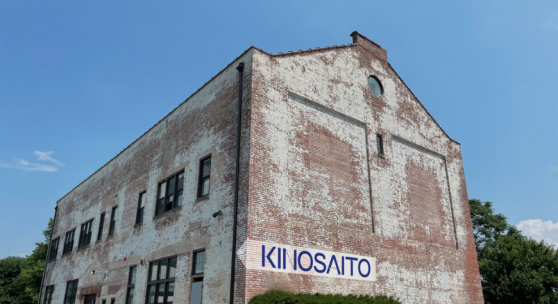 KinoSaito Art Center Opens in Lower Hudson Valley A nonprofit space committed to nurturing experimentation and interdisciplinary practice in the spirit of its founding muse, the artist Kikuo Saito.

July 20, 2021 (Verplanck, NY) - KinoSaito is pleased to announce the opening of its art center in Verplanck, NY, a hamlet located along the Hudson River in Westchester County. The nonprofit art center in a newly renovated former Catholic School building consists of two large, light-filled galleries, live/work artist residency studios, a performance space, an arts education classroom and a café. A contemporary art center, it was established to recognize and extend the legacy of Japanese-American abstract painter and theater designer, Kikuo Saito (1939-2016), and to present art that honors his commitment to working across disciplines. KinoSaito will open on September 9th with a retrospective of Saito’s work, a reprisal of one of his theater pieces originally performed at La MaMa, and open studios of inaugural artists in residence Alexandra Rojas and Jane Dickson. The art center will host special events from September 9 through September 12, 2021.

Kikuo Saito was born in Japan in 1939, and in 1966 immigrated to New York City where he became a prominent fixture of the downtown art scene. After decades painting in Tribeca and Soho studios, he sought a space for large-scale work and in 2013, acquired the former St. Patrick’s school. After his death in 2016, Saito’s widow Mikiko Ino and his former student, the architect Sarah Strauss of XS Architecture renovated the space, combining a sensitivity to the original building’s history with contemporary touches.

“KinoSaito, the name, plays on the name of Kikuo Saito and pays tribute to the ancient Greek meaning of “kino,” which is “motion”—across all disciplines and borders." —Mikiko Ino, President, KinoSaito

The Galleries
The art space’s two galleries will host exhibitions that rotate three times a year. One gallery is dedicated to exhibitions of contemporary art across disciplines, media, and artistic practices, often by residency alumni, while another gallery will be devoted to showcasing a changing selection Kikuo Saito’s work, drawing on a core collection of over 50 years of paintings, drawings, set designs and other creative output. Opening this September, “Painting as Performance/Performance as Painting”—which highlights the interplay between Saito’s paintings and theater design—and “Cloud Paintings,” a distinct set of works from the mid-1990s will serve as a mini retrospective of Saito’s work as a special presentation for this inaugural season.

Artists in Residence
KinoSaito’s artist-in-residence program will welcome two artists at a time for six-week sessions; each artist is provided with a 900sf studio space with living loft, along with a stipend. To encourage a multidisciplinary approach to creating art, KinoSaito’s residency program allows 24/7 access to both studio spaces and a theater. The first residents will be Alexandra Rojas, a Colombian-born multimedia artist, cultural activist, and independent curator, who was a studio assistant to Kikuo Saito, and Jane Dickson whose paintings, drawings, and prints have been the subject of numerous solo museum exhibitions over the years. The first session will run from August 1 through September 15. The second residency session (October 1 through November 15) will welcome acclaimed trans-disciplinary visual artist Clifford Owens, whose performance, video, and installation works have been exhibited widely, and Christine Rebet, a French-born artist whose work originates in drawings that are developed into video animations, installations, and performance.

The Theater
At the core of KinoSaito’s physical space, and its mission, is the theater. A 1500sf vaulted space, the theater will be the site of original new works of theater and performance, as well works from Kikuo Saito’s theater oeuvre reimagined by contemporary performance groups. Regular programming will include dance, performances, filmscreenings and concert recitals, along with performances, installations and new media work by artists in residence and visiting artists and companies. The opening performance, Toy Garden Reprise, revisits Toy Garden, originally performed at La Mama in 1996. Visitors will be able to see it throughout the fall. Archival footage will be screened in the theater when a performance is not scheduled.

Banana Dang Café
Visitors to KinoSaito can take a break and refuel at a café outpost of Banana Dang, a specialty coffee and smoothie shop run by Mario Jimenez and Thanh-Thanh Dang, both of whom knew Kikuo Saito from time they all spent in Rincon, Puerto Rico. Banana Dang will offer a new place in Verplanck for locals and out-of-towners to gather and enjoy local organic offerings.

“KinoSaito is a rare opportunity to present a new interdisciplinary space dedicated to inspiring emerging and established artists and their audiences, by fostering encounters and experiments in every field and medium. Visitors will find exhibitions, working resident artists, and performances all under one roof, informed by our commitment to the arts as an iterative, ever-evolving practice of creative freedom.” —Beth Venn, Executive Director

The opening of the art center coincides with Saito’s birthday on September 9th, marking a weekend of public opening events at KinoSaito, as it joins the vibrant Hudson Valley arts and culture scene. For more information on the art center’s opening events and ongoing programs, please visit kinosaito.org