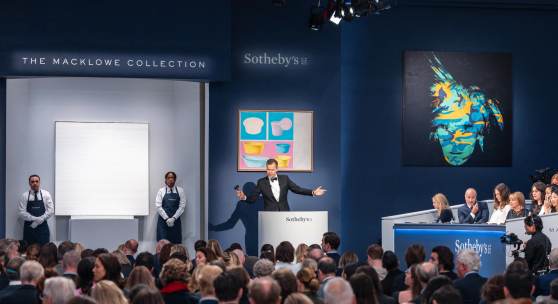 In Biggest Auction Season the Market Has Ever Seen

New York, 20 May 2022 - Sotheby’s week-long series of New York Marquee sales draws to a close today, capped off by an estimate topping $79.1 million Contemporary Day auction, in which - echoing patterns seen throughout the week - a further 14 records were set, many of them for women artists (8), as the vast majority of works (90%) found buyers, and estimates were smashed.

These results bring the year-to-date total for Modern and Contemporary sales at Sotheby’s worldwide to $1.65 billion - an historic level for the company, and up 50% compared to the same period in 2021 – a record-breaking year for Sotheby’s.

OVERARCHING TAKEAWAYS FROM THE WEEK:

Women artists and artists of color take center stage in The Now Evening Auction -
Works by women artists total $28 million, doubling their collective pre-sale high estimate of $14.4 million, with 13 new records set for women artists this week.
Artists of color accounted for 48% of The Now sale total ($35.1 million), led by Kerry James Marshall at $13.5 million. Records were also set for Matthew Wong, Simone Leigh and Jennifer Packer.
SALES AT A GLANCE
The ‘White Glove’ Macklowe Collection (16 May) became the most valuable collection ever sold, totalling over $922 million. The May offering brought $246 million (est. $167.6 - $236.4 million) following the $676 million offering in November; both were 100% sold.

The Contemporary Evening Sales (19 May) together totalled $283.4 million, the highest total for the category since 2019. The white glove Now Sale - an offering dedicated to the most exciting artists today - achieved a record total of $72.9 million, double its low estimate  (est. $35.9 - $51.9 million). The Contemporary sale that followed brought $210.5 million (est. $170.1 - $253.2 million).
BIDDING BACKGROUND
Sales drew participants from further afield than ever before, with participants from 50 countries, and six continents
Online participants came out in force, accounting for 84% of total registrants
The market remains as global as ever, with this week’s sales attracting participation from collectors in 50 countries
US participation remained strong, accounting for  60% of all buyers across Evening Sales
Asian collectors made their presence felt again this season, taking home a number of the top lots this week, including:
Warhol’s late Self-Portrait which sold for $18.7 million to a Japanese collector
Monet's Les Arceaux de Roses, sold for $23.2 million
Cy Twombly's Untitled, sold for $38 million
Adrian Ghenie’s Degenerate Art, sold for $9.3 million
VIEWERSHIP
3.6 million views of this week’s livestreams sales across Sotheby’s platforms, as well as an additional 2.2 million views on Sotheby’s TikTok account this week