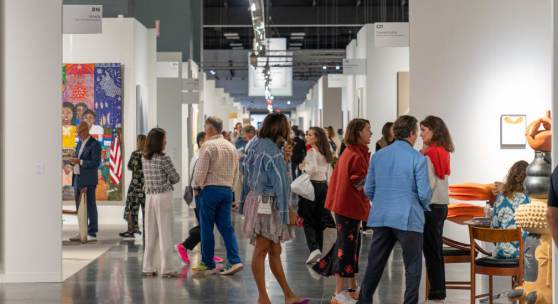 •Art Basel’s 2022 editionin Miami Beachclosed on Saturday, December 3, 2022, following a week of vigoroussales across all sectors of the marketand throughout the duration of the show•Reinforcing Art Basel’s position as thepremier global fair in the Americas, the eventsaw an overall attendance of 76,000throughout its VIP and public days, attracting major collectors and institutions from 88countries•The show presented an exceptional overview of artists, galleries, and new perspectives from the region across its main fair and special sectors, including monumental works in Meridians•Celebrating 20 years of Art Basel in Miami Beach, Art Basellauncheda Gift-Giving Campaign with a lead gift to the STEAM + program, whose mission is to bring active artists into the seven public schools of the city of Miami Beach•Art Basel, whose Lead Partner is UBS, took place from December 1to 3, with preview days on November 29 and 30,at the Miami Beach Convention Center (MBCC)

Art Basel celebrated its landmark20th-anniversaryedition in Miami Beach,signalingtwo decades of growth and impact by Art Basel as a cultural cornerstone in South Florida, across the Americas, and beyond. The 2022 edition –Art Basel’s largest to date in Miami Beach –brought together 282 premier galleries from 38 countries and territories, including 25galleries participating in the fair for the first time, as well as multiple international exhibitors returning to the show after a brief hiatus.

Reinforcing the fair’s commitment to showcasing exceptional art from the region, nearly two-thirds of this year’s participating galleries had gallery locations in North and South America, with especially strong presence of galleries from the United States,Mexico, Brazil, and Argentina. The show also featured standout presentations by galleries from Canada, Chile, Colombia, Cuba, Guatemala, Peru, Puerto Rico, and Uruguay, including newcomers Herlitzka + Faria from Barrio Norte, Paulo Kuczynski from São Paulo, and Rolf Art from Buenos Aires.

In celebration of its 20th anniversary, Art Basel launched aGift-Giving Campaign with a lead donationto the STEAM + program, whose mission is to bring active artists into the seven public schools of the city of Miami Beach. Founded in 2018, the programengages 5,000 children and teenagers every year and is administered by TheBass Museumof Art, working in conjunction with many other local institutions, including PérezArt Museum Miami, Miami City Ballet, New World Symphony, The Jewish Museum of Florida-FIU, Young Musicians Unite, and The Wolfsonian-FIU.UBS, Ruinart, La Prairie, Chateau D'Esclans, Valentino, Knight Foundation,and DRIFTare generously supporting this philanthropic campaign. The fundraiserwill run until the end of 2022, at which time the total sum collected will be announced.

‘This year’s fair was particularly exceptional. The quality and ambition of work in the halls has arguably never been higher, sales have been reported across all sectors, and the city has been electric,’says Noah Horowitz, CEO, Art Basel. ‘Over the last 20 years Greater Miami has firmly become a cultural destination of the highest order, with this week cementing itself as the apex moment in the American cultural calendar. We couldn't be more excited about what the future has in store for us here.’

‘Our 20th edition was not only the largest ever, but also the strongest in terms of the absolute quality of work,’says Marc Spiegler, the outgoing Global Director of Art Basel. ‘And it had the most diverse range of galleries and artistic voices ever present, making this show remarkably rich in discoveries. We are immensely proud of whathas been achieved together with ourgalleries, partners,and the city's cultural community.’

Galleries exhibiting across all sectors of the fair remarked on their experiences of thismilestoneedition: ‘We've been participating in ArtBasel Miami Beach for 20 years —we haven't missed a year, and every year, new collectors become new friends. It is a cultural crossroads that combines many energies, many colors, creating a lively rainbow.’Lorenzo Fiaschi, Co-Founder and Director, Galleria Continua (San Gimignano, São Paulo, Beijing, Havana, Les Moulins, Paris, Rome, Dubai)