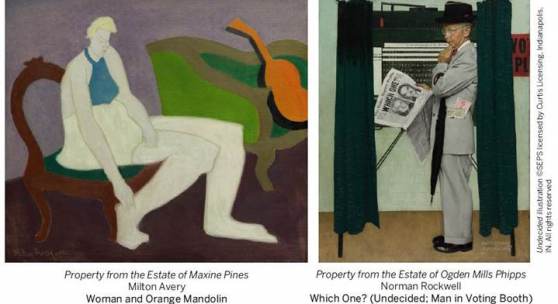 NEW YORK, 9 November 2016 – Sotheby’s New York is delighted to announce highlights from the 21 November auction of American Art. The sale is headlined by Norman Rockwell’s Saturday Evening Post cover, Which One?. Depicting an undecided voter attempting to choose between the 1944 presidential candidates, Which One? is an exceptional and timely example of Rockwell’s beloved imagery. The fall sale also includes strong examples of modernism by artists including Milton Avery and Charles Ephraim Burchfield, as well as Western art, which is well represented by Albert Bierstadt’s stunning Yosemite and four paintings formerly in the collection of Philadelphia sports owner and legend, Edward M. Snider.

Following an exhibition in San Francisco and with several highlights on view during the Impressionist & Modern and Contemporary Art sale previews in New York, the full offerings of American Art will open to the public on 19 November.

Painted to coincide with the 1944 election for the United States presidency, Norman Rockwell’s Which One? appeared on the cover of The Saturday Evening Post on 4 November 1944 and depicts an American citizen in a voting booth deciding between the Democratic incumbent President, Franklin Delano Roosevelt, and his Republican challenger, Thomas E. Dewey (*estimate $4/6 million) (separate release available). Additional significant Rockwells on offer this November include Pipe and Bowl Sign Painter (estimate $1.5/2.5 million) and Organist Waiting for Cue (estimate $1.2/1.8 million), both strong examples of the artist’s work for The Post in the 1920s. Remarkably, the former was the first image to appear on the cover of the publication in full color.

A critical period in Milton Avery’s career is represented by two works painted in the 1940s when the artist developed his mature style. Raymond’s Beach (estimate $1/1.5 million) from 1944 illustrates the influence the work of such European artists as Henri Matisse, George Braque and Pablo Picasso had on Avery during this period, as he began to eschew representational details in favor of vibrant and non-associative color areas within his compositions. The subject matter – his wife Sally sketching at the seashore – is one that appears frequently throughout Avery’s oeuvre even as he continued to develop his style and aesthetic. Woman and Orange Mandolin (estimate $800/1,200,000) from 1947 and sold by the Estate of Maxine Pines also exemplifies the artist’s distinctive brand of modernism. Encouraged by his new French art dealer, Paul Rosenberg, Avery continued to simplify forms and increase his reliance on color to organize space and express mood, helping to position the artist as one of the earliest American practitioners of chromatic abstraction.

Six works by the celebrated American watercolorist Charles Ephraim Burchfield are also included in the American Art sale. Spanning nearly 50 years of Burchfield’s career from 1915 to 1963, many of these works have been off the market for two decades. Leading the group is September Wind (estimate $300/500,000). A testament to the artist’s deep reverence for the natural world, this vibrant and dynamic watercolor from 1963 emphasizes the ephemeral beauty of the changing seasons.

Western selections in the November auction are highlighted by Albert Bierstadt’s Yosemite (estimate $1.5/2.5 million), a stunning depiction of the territory that, at the time this work was painted, was largely unexplored. Yosemite also includes a rare self-portrait of the artist and was likely previously owned by the Commanding General of the Union Army and former United States President, Ulysses S. Grant. The spectacular beauty of the American west is also captured in four paintings from the collection of Edward M. Snider, sold with full proceeds benefitting the Edward M. Snider Youth Hockey Supporting Organization. Amongst Mr. Snider’s collection of Impressionist & Modern Art, European and Master paintings, these landscapes by Albert Bierstadt, Thomas Moran and William Wendt stand out in their embodiment of the American pioneering spirit. Painted in 1905, Thomas Moran’s Cascade Falls is a dynamic view of one of the Yosemite Valley’s most dramatic waterfalls, which the artist first encountered in 1871 while traveling on a commission for Scribner’s magazine (estimate $800/1,200,000).