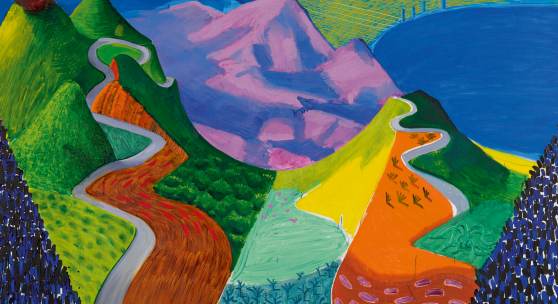 NEW YORK, 27 April 2018 – Sotheby’s is thrilled to unveil the latest addition to the Contemporary Art Evening Auction, David Hockney’s Pacific Coast Highway and Santa Monica. Featured in critically-acclaimed retrospectives at the Tate Britain, London, the Centre Pompidou, Paris and The Metropolitan Museum of Art, New York, this large-scale oil painting is a landmark of Hockey’s career. Carrying a pre-sale estimate of $20/30 million, Pacific Coast Highway and Santa Monica is poised to break the artist’s record – set by Sotheby’s in New York in November 2016 for Woldgate Woods – when it makes its auction debut on 16 May. The New York exhibition opens to the public on 4 May.

David Galperin, Head of Sotheby’s Contemporary Art Evening Auction in New York, commented: “Following its tour in the sensational museum retrospective last year, we are honored to bring this exuberant monumental landscape to market for the first time publicly this May. David Hockney’s ‘Pacific Coast Highway and Santa Monica’ is a true triumph of his singular vision: a panoramic and kaleidoscopic paean to his adopted hometown. We eagerly anticipate setting a new bar for the artist at auction on the 16th with one of the most well-known paintings of his beloved California.”

One of a limited group of monumental California landscape paintings, Pacific Coast Highway and Santa Monica is a significant marker of David Hockney’s sixty-year career. The ambitious painting, dazzling with hues of chartreuse, tangerine, rose, lavender and cerulean across its 10-foot wide canvas, epitomizes the artist’s bold use of color – a characteristic that has come to define his oeuvre. Comparable works hold court in renowned institutions such as the Los Angeles Museum of Contemporary Art, Museum Ludwig, Cologne, and the Walker Art Center, Minneapolis. This 1990 oil on canvas is also an acknowledgement of the importance and significance of traditional painting. At a time when artists across the board were turning away from painting and towards photography and conceptual art, Pacific Coast Highway and Santa Monica addresses the history and impact of artistic styles such as Post-Impressionism and Fauvism, all executed in Hockney’s signature vernacular.

Pacific Coast Highway and Santa Monica may also be interpreted as David Hockney’s heartfelt ode to Los Angeles. In his autobiography That’s the Way I See It, which features the present work on the back cover, he writes, “anyone who had been on my Wagner drive would immediately recognize Pacific Coast Highway [and Santa Monica] – a multiple view of Santa Monica Bay and the mountains.” Wagner Road, the artist’s multifaceted and variegated daily route from his home in the Hollywood Hills to his studio on Santa Monica Boulevard, encapsulates Los Angeles’s bright sunlight and bold colors, the very characteristics that drew Hockney away from the grey skies of London. Remembered and recalled in his studio, the result is a masterpiece in which mountain peaks, rolling hills, serpentine roads, calm bays and orderly cityscapes harmoniously vie for attention, guiding the viewer from the top of the road to the horizon.