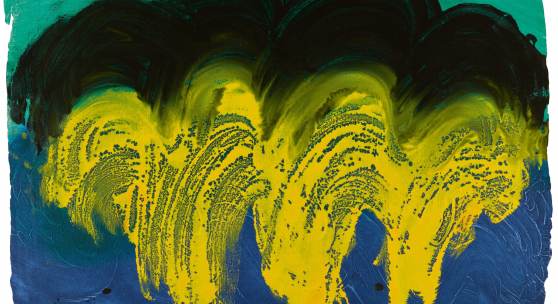 Antony Peattie, Howard Hodgkin’s partner, said: “Prints mattered to Howard all his working life. He collected them avidly, but with a particular passion for engravings after Poussin. He delighted in the way prints made his own work available to a wider public and revelled in the technical challenges, as collaboration with printers offered him an alternative to the lonely solitude of the painting studio. The proceeds of this sale of his Artist’s Proofs will enable me to put together a museum collection of Howard’s prints, so that in future that the public can have access to all of it. Howard’s work enjoys a strong emotional link with the public. This is another step in honouring his legacy.”

Frances Christie, Sotheby’s Head of Modern & Post-War British Art, said: “Howard Hodgkin was an erudite artist whose deep engagement with every aspect of the arts meant that he steered a unique course. Although best-known for his paintings, Hodgkin’s works on paper reveal the sheer scope of his sources and approaches - from stage designs and book covers to a prodigious body of prints created in collaboration with master printmakers over 50 years. We are thrilled to present this special sale celebrating his dynamic approach to working on paper.”

In October 2017, Sotheby’s sale Howard Hodgkin: Portrait of the Artist focused on the myriad objects across Indian and Islamic Art, European sculpture, rugs, textiles and furniture that Howard had collected throughout his life and which provided much inspiration for his own work. The auction captured the imagination of thousands of visitors and bidders across the world.

Howard Hodgkin: Working on Paper will reveal the scope, diversity and ultimately the great passion Hodgkin had for working on paper. Alongside stage designs for The Royal Ballet and Mark Morris Dance Group, commissions from projects such as the Olympic posters and illustrations for works by his friends Julian Barnes and Susan Sontag, the auction will include a significant proportion of dazzling prints from the 1960s up to some of the last works he produced. Every print in the sale is an Artist’s Proof, retained by Hodgkin in his personal collection.

The exhibition will go on view to the public in Sotheby’s New Bond Street galleries on Friday 8 June 2018, as part of this summer’s Modern British Art Week. On Sunday 10 June, Sotheby’s will host ‘The Journey of Making: Howard Hodgkin Working on Paper’, a gallery talk with Hodgkin’s printmaker Andrew Smith.

Following the auction, the proceeds will fund a complete museum collection of Hodgkin’s graphic work that is fully accessible for the public to see and enjoy, as well as supporting a new edition of the artist’s Catalogue Raisonné, which will feature 189 prints and many unique works on paper.