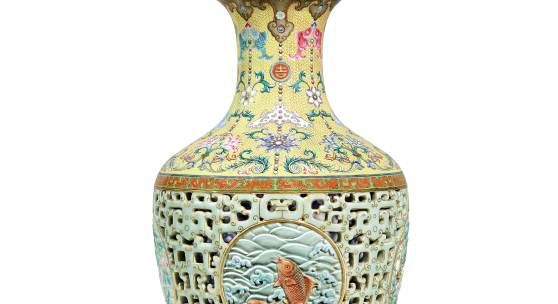 Sotheby’s Hong Kong Chinese Works of Art Autumn Sale Series Presents The Yamanaka Reticulated Vase Estimate: HK$50-70 Million / US$6.4-9 Million LIKELY TO FETCH MULTIPLES OF THE ESTIMATE Pair to the Famous Vase Hammered at £43 Million in 2010 Originally included in the 1905 Yamanaka Exhibition in New York Acquired by a Private Japanese Collector in 1924 Dormant for Almost a Century Among the Most Complex Porcelains Ever Conceived by Tang Ying for the Qianlong Emperor

Hong Kong, 17 August 2018 – Opening this season’s Sotheby’s Hong Kong Chinese Works of Art Autumn Sale Series 2018 on 3 October is The Yamanaka Reticulated Vase which has remained dormant in a Private Japanese Collection for almost a century since its acquisition in 1924 following its exhibition with Yamanaka in New York in 1905. Carved and exquisitely painted with four pairs of fish below Rococo-inspired motifs on a yellow sgraffiato ground, the exceptional famille-rose reticulated vase is skillfully modelled with an inner blue-and-white vase. Ranking among the most complex porcelains ever commissioned by the Qianlong Emperor, it is the pair to the famous Bainbridge Vase hammered at £43 million in 2010.

Nicolas Chow, Chairman, Sotheby’s Asia, International Head and Chairman, Chinese Works of Art, comments, “It is a great privilege for us to offer this Qing reticulated vase from the Imperial collection of the Qianlong Emperor this season. Not only is the vase unique and elaborate in design, it is also in pristine condition. To think, the distance the singularly fragile vase has travelled, and the tumultuous times it has survived, for it to be standing here in front of us today without so much as a crack or a chip, is truly extraordinary.”