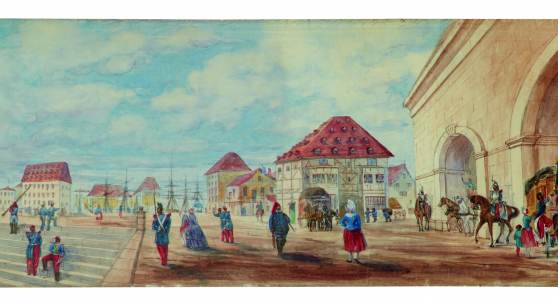 Sotheby’s inaugural Art of Travel and Exploration sale in London on 13 December 2018 will present an exceptionally rare panorama which brings to life the epic journey over land and sea between Britain and the Far East. Measuring over fifty metres in length and dating to circa 1860, it was painted as a collaboration between John Lamb, Primus, and his son John Lamb, Secundus. Both were employed as shipping agents in the city of London, but were artists of some standing.

Dating from before the dawn of cinema, moving panoramas of this type were extremely popular spectacles in the nineteenth century. While this panorama is on a more practical scale, those designed to be seen in theatres are thought to be the largest paintings ever made. The Lambs intended the work to be viewed as a moving image and it would originally have been mounted onto wooden spools, which were to be operated by hand. The panorama was also to be accompanied by a narrative, written by Lamb Secundus; his humorous text survives in its original form and is included for sale. Estimated at £60,000-80,000, this extraordinary achievement comes to the market from an English private collection, having been passed down the artists’ family by descent to the current owner.

Richard Lowkes, Sotheby’s 19th Century European Paintings Specialist, said: “London to Hong Kong in Two Hours is an amazing survival from the golden age of the moving panorama. It was very exciting for us to unroll the panorama in its entirety for the first time, and see the bright vivid colours which are as fresh today as when the work was painted over 150 years ago. Taking in highlights such as Jerusalem, the pyramids, and the Red Sea, and in Sri Lanka banyan trees and a tiger hunt, the panorama is full of details which bring to life both west and east as seen through the eyes of a Victorian traveller.”

The journey is dramatic and eventful. Beginning at London Bridge Wharf, we are invited to board the steam ship ‘Happy Go-Lucky’. Setting sail, the ship glides past, amongst other sites of interest, Billingsgate Fish Market, the Tower of London, and London Docks, before heading out into the English Channel. At Ostend we enter the bustling train station and after a ‘scramble for our tickets’, we travel south to Marseilles by rail. There, in an attempt to ‘fortify our shattered frames’, we stay at the ‘splendid’ Grand Hotel des Empereurs, before re-connecting with our ship.

Crossing the Mediterranean, via Malta and Mount Carmel, we arrive at Jaffa - which looks ‘curious’ in the moonlight. From there the journey is made overland (the voyage predating the Suez Canal), taking in Jerusalem before travelling onto Suez. In the desert we encounter an encampment of Bedouin Arabs, narrowly escape a ‘band of lawless robbers’, experience a mirage and admire the ‘wondrous’ Pyramids. Upon reaching the coast, we sail down the Red Sea and across the Indian Ocean.

At Ceylon we explore the island, marvelling at natural wonders such as the exotic ‘Banian Tree’, and witness a tiger hunt. At Point de Galle ‘the port from whence Steamers and ships of all Nations start for their long voyages to all quarters of the Globe’, we observe soldiers of the Poonah Light Horse, a native cavalry regiment that had remained loyal to Queen Victoria during the Indian Mutiny of 1857.

The Art of Travel & Exploration will showcase work by Western artists who went beyond the familiar sites of Europe and the Mediterranean to destinations further afield. From China to South America, and from the Poles to Africa, these artist-travellers recorded their experiences in evocative scenes of daily life, topographical views, and exotic images of flora and fauna.