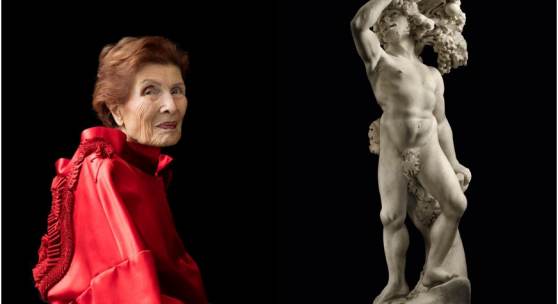 To Be Offered as A Single-Owner Sale in
January 2021 in New York,
As Part of Sotheby’s Annual Masters Week

Highlights Include:
Pietro and Gian Lorenzo Bernini’s Groundbreaking
Early 17th- Century Marble figure of Autumn
By the Artist Who Defined the Baroque Style
Estimate $8/12 Million
*Poised to Establish a New Auction Record for the Artist*

Two Large Paintings by Dosso Dossi
From the Camerino d’Alabastro of Alfonso I d’Este, Duke of Ferrara
Estimate $3/5 million

An Intact and Stunning Triptych by Pieter Coecke van Aelst
From Circa 1520
Estimate $2.5/3.5 million

New York, 16 October 2020   – Sotheby’s is honored to present the collection of prominent New York collector, interior designer, and philanthropist Hester Diamond in a dedicated single-owner sale in New York in January 2021, as part of Sotheby's annual Masters Week auctions. The selection of works on offer – spanning Old Master paintings and sculpture, contemporary art, 20th century furniture and design, exotic minerals, and more – is a reflection of Diamond's vision as an innovative and inquisitive collector, curating her collection of Old Masters amidst vibrant and eclectic modern and contemporary pieces in a signature visual style that defined her independent spirit.

George Wachter, Chairman of Sotheby’s America and Co-Chairman of Sotheby’s Old Master Paintings Worldwide, commented: “Dynamic, independent, and incomparable, Hester Diamond was a fearless and visionary collector. Whether through the expressive qualities of the paintings and sculpture in her home, the electric colors of her furniture, or in the mesmerizing patterns of the textiles she chose, each piece in her collection personifies Hester’s distinct vision and the freedom that came with being true to herself. The ability to pursue her passions with such conviction and clarity not only propelled Hester to build an extraordinary career as a venerated interior designer, but, in a remarkable feat, to assemble important collections of both Modernist works and Old Master paintings and sculpture from the ground up. While others were intimidated by change, Hester embraced it with a fervor, never hesitating to start anew – she instinctively knew how to challenge the status quo with a fresh perspective, both in her art collection and in life.”

The Hester Diamond collection features an unparalleled selection of Old Master paintings and sculpture, highlighted by wonderful examples of early Italian Renaissance painting, early Netherlandish painting, and a remarkable array of terracotta, marble and wood European sculpture from masters such as Lorenzo Ghiberti, Benedetto da Maiano, Girolamo della Robbia and Leonhard Kern. Spanning the early 14th century through the 18th century, the Old Master works in the collection are characterized by their eclecticism, which attests to Hester’s unique eye, seeking only the highest level of quality and a fearless pursuit of her interests. Drawn especially to bright, bold colors which can be rare in the Renaissance era, Hester acquired extraordinary works by important artists across a spectrum of genres, styles, and geographies. With Old Masters as the core of the collection, Diamond also collected significant pieces of contemporary art, as well as minerology. Displayed together, the collection was entirely unique to her personality, and represented her unwavering, singular spirit.

Leading the collection is an exceedingly rare sculpture by Gian Lorenzo Bernini and his father Pietro titled Autumn (below, estimate $8/12 million), one of only a handful of sculptures by Bernini and his father that remain in private hands. Few artists have changed art history as significantly as Gian Lorenzo, who is remembered as the greatest sculptor since Michelangelo, and whose artistic achievements gave life to the new figurative language of the Baroque, which dominated all of Europe for nearly two centuries. Carved in 1616 when Gian Lorenzo was only 18, the exceptional and powerful Autumn, symbolizing abundance and rebirth in the guise of an unbridled man of the woods reaching for a piece of fruit, is an indisputable masterpiece by Bernini in which Gian Lorenzo’s involvement can be identified. The present work represents the young Bernini's bravura and the moment when Gian Lorenzo began to eclipse his father in skill and conception. The young Bernini was still working in his father's studio at the time Autumn was made for Prince Leone Strozzi, one of the Berninis’ first major patrons in Rome.  Bernini's work very rarely comes up for auction, with the last piece, a terracotta bozzetto or sketch, titled Il Moro, selling in 2002 at Sotheby's London for $3.2 million, the current auction record for the artist