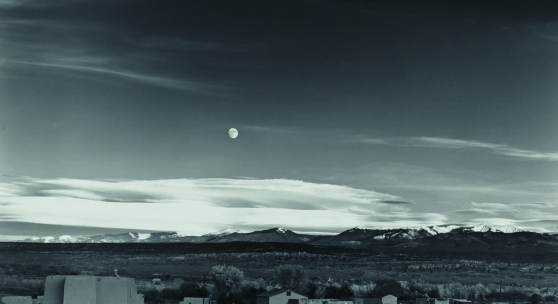 Sale is Led by:

Early Prints of Boards and Thistles; Lodgepole Pines, Lyell Fork of the Merced River; Grand Canyon, and
Exceptionally Rare Images of Yosemite from the 1920s and 1930s

New York, 22 October 2020  – Sotheby’s is pleased to announce that A Grand Vision: The David H. Arrington Collection of Ansel Adams Masterworks will be offered in a live auction at Sotheby’s New York on 14 December. A comprehensive survey that spans six decades of the beloved artist’s unparalleled career, from 1915 to 1975, the David H. Arrington Collection is among the most significant collections of Adams photography in private hands. This curated selection of more than 100 of Adams’s most iconic photographs features dozens of early prints, murals, and portfolios, and is led by Adams’s most legendary work, Moonrise, Hernandez, New Mexico (estimate $700,000/$1 million), the earliest print of the image to come to market. The auction is a watershed moment for collectors of Adams photographs, as well as collectors of American masters.

Emily Bierman, Head of Sotheby's Photographs Department in New York, commented: “It is our immense privilege to bring David H. Arrington’s important collection of Ansel Adams photographs to the global collecting community.  The Arrington Collection was assembled with a true passion for the medium and a deep understanding of Adams’ extraordinary seven-decade career.  With his laser focus on print quality and condition, Mr. Arrington added only the best examples to the collection, from small jewel-like prints of the 1920s to mammoth mural-sized prints of the 1950s and 1960s.  His focus on collecting only the most superb prints is apparent when viewing the sumptuous early print of Moonrise, Hernandez, New Mexico, an unequivocal masterpiece in the history of art that rivals any blue chip painting.”

Recognized during his lifetime as the preeminent landscape photographer of the 20th century, Ansel Adams (1902-1984) captured, the majesty and grandeur of the American West. His striking black and white images—as impressive for their technical virtuosity as for the poetry of their breathtaking vistas—express reverence for both the beauty of wilderness and the power of the photographic medium. An outspoken environmentalist, Adams served as the director of the Sierra Club for nearly forty years and is particularly well-known for his iconic images of Yosemite National Park. A staunch advocate for his chosen medium, Adams wrote and lectured extensively, co-founded the group f/64 and helped to establish the Department of Photography at The Museum of Modern Art in New York. A three-time recipient of a Guggenheim Fellowship, he was named to President Lyndon Johnson’s task force on the environment in 1965.  In 1980, President Jimmy Carter bestowed upon Adams the Presidential Medal of Freedom, the nation’s highest civilian award. Today, photographs by Adams reside in innumerable museum collections, including The Museum of Modern Art, the National Gallery of Art in Washington, D. C., SFMOMA (in his birthplace of San Francisco), and the Victoria and Albert Museum in London.

The David H. Arrington Collection of Ansel Adams Masterworks grew out of the lifelong passion of Arrington, a native Texan who currently serves as President of Arrington Oil & Gas Operating LLC. Born and raised in the Dallas community of Oak Cliff, Arrington developed a deep interest in photography as a teenager when he began taking pictures and studying the work of Ansel Adams to improve his technique and skills. In his late twenties, he started collecting Adams’ work, a pursuit which over the decades gave rise to one of the largest and most important privately held collections of work by the photographer. Highlights from the collection have been exhibited widely, including in Ansel Adams: Classic Images (Los Angeles County Museum of Art), Ansel Adams at 100 (San Francisco Museum of Modern Art, traveling thereafter to The Art Institute of Chicago, the Hayward Gallery, Berlin’s Kunstbibliothek, Los Angeles County Museum of Art, and The Museum of Modern Art), Georgia O’Keeffe and Ansel Adams, Natural Affinities (The Georgia O’Keeffe Museum), Photography From the Mountains to the Sea (The Royal Museums Greenwich), and Ansel Adams: Eloquent Light, at the Amon Carter Museum of American Art.