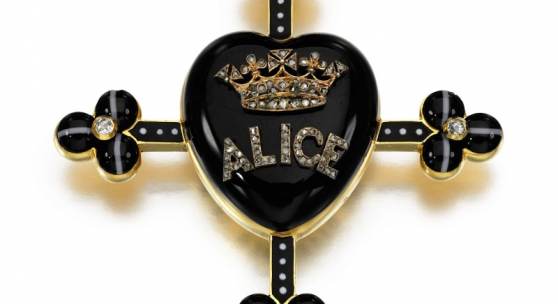 Mourning Jewellery Belonging to Queen Victoria to be Offered from the Collection of her Great-Great-Granddaughter 24 March, Sotheby’s London

The tradition of wearing mourning jewellery dates to the 16th century, where macabre pieces would serve as a tangible reminder of death – a physical embodiment of the concept of memento mori. However, by the 19th century, mourning had taken on a different tone, as the emphasis shifted to the individual and the celebration of love, sentimentality and remembrance. This new mood was inspired by the monarch herself, whose name has become synonymous with the act of mourning after she famously wore black every day for forty years after the death of her beloved husband Albert.

Over the course of her long reign, Queen Victoria suffered many losses, spending decades mourning not only Albert, but also her mother and three of her children. During this time, she adorned herself in black crepe and wearable mementos of her loved ones. The Queen set the example for her court and was an admired public figure, and so mourning jewellery became among the most fashionable commissions.

On 24 March, Sotheby’s London will stage an auction of the collection of Patricia Knatchbull, 2nd Countess Mountbatten of Burma, great-great-granddaughter of Queen Victoria, great niece of Russia’s last Tsarina, first cousin to Prince Philip and the daughter of Britain’s last Viceroy of India, Louis Mountbatten. Among almost 400 lots, the sale will offer four mourning brooches that had brought solace to Queen Victoria, all appearing at auction for the first time, having been passed down in the family for generations.

On 14 December 1878, the anniversary of Prince Albert’s death, Victoria’s third child Alice died of diphtheria at the age of 35. Princess Alice’s youngest daughter, Princess Marie of Hesse and by Rhine, had also died of the same disease at the age of four. Three of the brooches mark Alice’s tragic passing including: an onyx and seed pearl button commissioned by Queen Victoria in 1879 with a portrait miniature of Princess Alice (est. £1,000-1,500), an agate and pearl pendant with a lock of hair inscribed ‘from Grandmama VR’ as gift from the Queen to Alice’s daughter, Princess Victoria (est. £1,000-1,500) and a hardstone, enamel and diamond cross centring on an onyx heart with Alice beneath a coronet (est. £2,000-3,000).

The fourth was commissioned by Prince Albert circa 1861 for Queen Victoria to mark the death of her mother. An agate and diamond pendant, it opens to reveal a miniature photograph of the Queen’s mother, Princess Victoria of Saxe-Coburg-Saalfeld, later Duchess of Kent, with a touching inscription by the Prince Consort (est. £1,000-1,500).

Many of these pieces feature a lock of hair, testament to the Victorian belief that hair had a sacred and immortal quality, containing something of the essence of the person.

Prior to the auction, the lots will be exhibition in New Bond Street from 20-23 March.