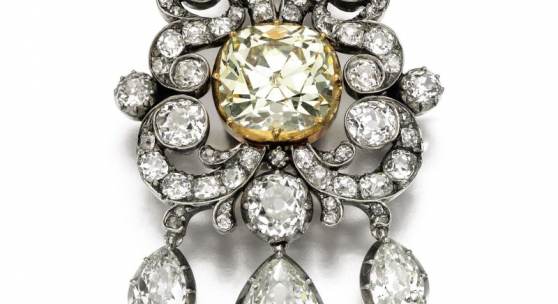 Featuring Gifts from her Father, Louis Mountbatten And Historic Pieces from the Jewellery Box of Queen Victoria To Be Offered at Sotheby’s London on 24 March

he 2nd Countess Mountbatten of Burma, first cousin to Prince Philip, daughter of Britain’s last Viceroy of India and great niece of Russia’s last Tsarina, the late Patricia Edwina Victoria Mountbatten was born in 1924 into a dazzling dynasty of royal and political relations. On 24 March 2021, over 350 lots from her collection will be offered, including a selection of jewels from well-loved pieces belonging to Patricia herself to treasures passed down over centuries from the likes of her great-great- grandmother of Queen Victoria and her mother Edwina Ashley’s jewellery box. Personalised Gifts from Louis Mountbatten to his Daughter Patricia was extremely close to her father, Louis Mountbatten, who on the occasion of her wedding designed a distinctive monogram to reflect her new husband’s family name and title. This monogram appears in two lots in the sale – a luxurious leather jewellery case from Asprey (est. £400-600) and a clip brooch (est. £200-300), illustrated above), both gifts from Mountbatten to his cherished daughter.

A further brooch designed by Mountbatten for Patricia takes circular form, with a pierced undulating pattern pavé-set with single-cut diamonds, set to the centre with a brilliant-cut diamond – the waves thought to have been inspired by the sea.

Among the most unique lots in the sale is a bracelet that strings together ten enamel medallions, each with Girl Guide insignia, designed by Mountbatten for Patricia’s 21st birthday (est. £400-600). Among these is the insignia for the 1st Buckingham Palace Company, which was established in 1937 to allow the then Princess Elizabeth, now Queen Elizabeth II, to become a Girl Guide. It was composed of around twenty members, made up of children from the Royal household as well as Palace employees, and during the first meeting Princess Elizabeth was elected second of the Kingfisher Patrol, with Patricia Mountbatten acting as her Patrol Leader.

"One of the most beautiful women in England": Edwina Ashley’s Dazzling Jewels The marriage between Patricia’s parents in 1922 brought together two of the most glamorous figures of the period. When Edwina Ashley, goddaughter of Edward VII, had come out into society in 1920 she was the most intriguing and intelligent of the debutantes of her day. Then the following year, after the death of her grandfather, financier and philanthropist Sir Ernest Cassell, she also became the richest.

Her wedding to Mountbatten attracted attention around the world, with entire issues of magazines devoted to covering the events of the day and the list of presents taking up a whole page of The Times. Gifts included a diamond pendant from Queen Alexandra, a brooch from the Aga Khan and a horse from the Maharajah of Jaipur. Among the presents from Louis to his bride was this 1920s gem set and diamond bracelet (est. £3,000-4,000).

Edwina had a particular penchant for Art Deco “Tutti Frutti” jewels, which took inspiration from Indian cut-coloured gems, and so held a special resonance for the Countess, who had been the last Vicereine of India. Alongside a pair of gem- set and diamond brooches and ear clips, is a 1930s jabot pin modelled as a bird perched in a potted tree, the leaves composed of carved emeralds, the flowers and fruit of carved sapphires and rubies and the branches set with diamonds (est. £7,000-9,000, illustrated on page one). Leading the group is a necklace designed as an articulated wreath of carved rubies, emeralds and sapphires, accented by collet-set circular-cut diamonds and sapphire beads inset with single-cut diamonds (est. £40,000-60,000).

Known for her independent spirit in all areas, jewellers also remarked on Edwina’s taste for the avant-garde in fashion. This flair is best encapsulated by this unique emerald and diamond bracelet, designed as a series of octagonal rock crystal links, crafted by Hennell in 1929 (est. £15,000-20,000). Hennell ranked among of the great British jewellers in the Art Deco period, producing pieces that were equal to all the grand jewellery houses such as Cartier and Boucheron.

Queen Victoria’s Mourning Jewellery
The tradition of wearing mourning jewellery dates to the 16th century, where macabre pieces would serve as a tangible reminder of death – a physical embodiment of the concept of memento mori. However, by the 19th century, mourning had taken on a different tone, as the emphasis shifted to the individual and the celebration of love, sentimentality and remembrance. This new mood was inspired by the monarch herself, whose name has become synonymous with the act of mourning after she famously wore black every day for forty years after the death of her beloved husband Albert. Over the course of her long reign, Queen Victoria suffered many losses, spending decades mourning not only Albert, but also her mother and three of her children. During this time, she adorned herself in black crepe and wearable mementos of her loved ones. The auction offers four mourning brooches that had brought solace to Queen Victoria, all appearing at auction for the first time, having been passed down in the family for generations.

Pictured above is a hardstone, enamel and diamond cross centring on an onyx heart commemorating Princess Alice, Queen Victoria’s third child, who died of diphtheria at the age of 35 (est. £2,000-3,000).