TAKE YOUR SOFA ON HOLIDAY 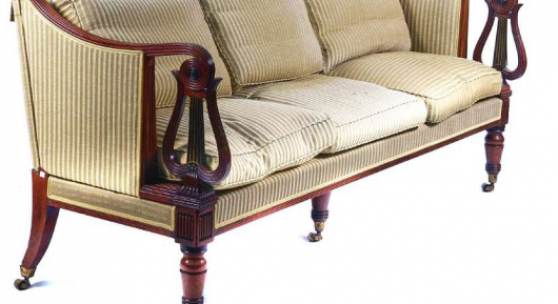 Rare Campaign Sofa Comes up for Auction at Bellmans
Campaign furniture has had a revival, but it is usually the chest of drawers that come up for auction. Bellmans is now offering a rare Campaign sofa in its forthcoming auction on Wednesday, 4th August during its August auction week running from the 3rd to 6th of August, which carries an estimate of £1,500 - £2,500. This campaign or metamorphic sofa has been associated with the work of Morgan & Sanders (1801-1820), who alongside Thomas Butler and William Pocock were the leading proponents of ‘patent’ furniture in the Regency era. The designs of which enabled the elite army and navy officers to travel in relative luxury. This sofa was by repute acquired from The Kepples Head Hotel, Portsmouth, where it was recorded in the 19th Century hotel inventory. The hotel is only 100 yards from the main naval base gate and was regularly used by Naval Officers and Diplomats, prior to embarkation from Portsmouth.

Made in circa 1810, this rare regency campaign sofa with its mahogany show-wood frame reeded overall is raised on turned legs to brass castors and the whole sofa separating into transportable sections. The ends with unusual lyre end supports,  

with ebony veneered and brass inlaid simulated strings. It is no surprise that this design was chosen as the lyre was a popular instrument among aristocratic gentil amateur lady musicians and imbued with illusions of Classical significance. Lyre back chairs feature in an advert by Morgan & Sanders in the monthly periodical The Repository of Arts on the 1st August 1809, which shows their premises on the upper floor on the Strand.

Morgan & Sanders were leading London manufacturers of ‘campaign furniture’ in the late 18th and early 19th century. Holding several patents for campaign and metamorphic furniture and supplying furniture to the Royal household. Campaign furniture was on the whole of simple, practical design with the ability to be dismantled for ease of shipment to various theatres of war or empire. However, examples of very elaborate and formal furniture are recorded and were more likely to have been supplied for use by high-ranking officers or diplomats placed overseas. The sofa with its elaborate lyre ends, falls into this latter category.

In 1805 Morgan & Sanders re-branded their premises as ‘Trafalgar House’, taking advantage of the death of the naval hero and client, Lord Nelson. Morgan & Sanders had supplied some furniture to Nelson’s house, Merton in Surrey, and collapsible pieces used on board HMS Victory.